Hera is a planetary defense mission to a near-Earth binary asteroid system led by the European Space Agency (ESA) in collaboration with JAXA, who will contribute the thermal imager and knowledge of asteroid science – the heritage of Hayabusa2. Along with NASA’s DART (Double-Asteroid Redirection Test) mission, the technology required for planetary defense will be demonstrated for the first time in history, in addition to investigating planetary formation and evolution processes.

Asteroids are primitive bodies that preserve clues to the formation and evolution of the Solar System, and are scientifically important targets that have been explored by space missions including Hayabusa and Hayabusa2. On the other hand, more than 27,000 asteroids have been found that come close to the Earth’s orbit. These are potentially hazardous because they may collide with the Earth and cause catastrophic disaster in the near future. The 160 km diameter Chicxulub crater at Yucatan Peninsula in Mexico was formed during the impact of a 10 km-diameter meteor 66 million years ago, probably causing the mass extinction of terrestrial life including the dinosaurs in the late Cretaceous period. This is the third largest crater discovered on the Earth, indicating that such catastrophic impacts may have happened many times in Earth’s history.

Smaller asteroids are more abundant and so collide with the Earth at a higher frequency. For example, 50 m sized asteroids are expected to collide every 100 to 1000 years. In 1908 in Tunguska, a massive explosion occurred in the air, attributed to a 60-100 m sized meteor air burst that flattened the Taiga forest over 2000 km2; an area almost equal to Tokyo. A similar but weaker air burst occurred in 2013 near Chelyabinsk due to a shock wave from a 17 m sized meteor passing through the atmosphere, causing more than 1500 injuries and damaging 4500 buildings. A meteor hit to a metropolitan area could lead to fatal damage of a nation. Just like natural disasters such as earthquakes or tsunamis, disaster preventative measures are needed for potentially hazardous asteroids. If asteroids are identified as liable to become hazardous within decades based on ground observations, “Planetary defense” is the activity employed to deflect such asteroids and avoid the collision with Earth and subsequent disaster, using knowledge of planetary science and the technology from space engineering.

So far as we know, all the asteroids that may possibly collide with Earth in the next 100 years are smaller than 100 m in diameter. These asteroids can be deflected (their trajectory changed) through a high-speed impact with a several meter sized spacecraft. Even a small deflection can save the planet and life from disaster, if the collision with Earth is delayed by tens of thousands of years. However, it is not easy to guide a spacecraft to hit a small asteroid, so a technical demonstration is needed. The effects of deflection from the spacecraft collision depend on the physical properties of the asteroid such as density and hardness, but unfortunately the nature of small asteroids remains poorly known.

Hera is an European Space Agency (ESA)-led mission to an S (Stony) type near-Earth binary asteroid system: Didymos and its moon Dimorphos. AIDA (Asteroid Impact & Deflection Assessment) is the international planetary defense mission, consisting of Hera and the NASA-led mission DART. DART will be launched this fall and collide with Dimorphos in 2022 at a speed of 5 km/s. The impact phenomenon will be imaged from a CubeSat released before the impact, and the slight change of trajectory will be observed from ground observatories as the change in the rotation period of Dimorphos around Didymos. Hera will be launched in 2024 and rendezvous with the binary asteroid in 2027 for observations. After the kinetic impact to Dimorphos by the NASA’s DART spacecraft, Hera will verify the effect of asteroid deflection by observations for half a year of the orbital and rotational evolution, the shape and dimension of the excavated crater, and the physical and mineralogical characteristics of the asteroid.

Japan is the top runner of asteroid exploration and JAXA will greatly contribute to the Hera mission, with providing a thermal imager and investigating asteroid science such as impact science, surface geology, dynamics, and thermophysical properties with experience gained during the Hayabusa2 mission. This will begin the planetary defense collaboration between JAXA, NASA, and ESA.

The Hera mission also provides unique opportunities for understanding planetary formation and evolution processes by comparing the dependency on diameter between Didymos and Dimorphos, on taxonomic class between the S-type Didymos and the C-type asteroid Ryugu visited by Hayabusa2 (and also B-type asteroid Bennu visited by NASA’s OSIRIS-REx), and the kinetic energy in impact process through comparison between DART and the small carry-on impactor from Hayabsua2, as well as by investigating the dynamical evolution of the asteroid binary system. Understanding the binary asteroid by comparative asteroid studies, physical properties, impact phenomena, and dynamics will provide new insight in the origin and evolution of the Solar System. 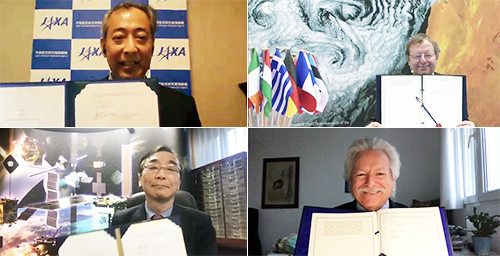