Main points of this study

1) We can obtain valuable lunar rock samples that have not been brecciated, fragmented, or space-weathered, and thus may contain gases (including water) trapped in the past, and also may have maintained records of the past intrinsic magnetic dynamo field. Lunar lava tube also offers analog environments that can provide insights into Martian subsurface lava tubes, where Martian life might have emerged and perhaps might even survive to this day.

2) Lava tubes may be the best place to build large-scale lunar bases because their interiors protect from dangerous space radiation, micrometeorite bombardment, and wide temperature oscillations.

Lunar lava tubes, or subsurface caves formed by lava flows, are important from the perspectives of both science and human exploration. If they exist, they might be the best candidate sites for future lunar bases, because of their stable thermal conditions and potential to protect people and instruments from micrometeorites and cosmic ray radiation. The same stable and protected environment that would benefit future human explorers also makes them an enticing science target: original lava compositions, textures, and even magmatic volatiles are expected to be preserved in pristine condition within these lava tubes. Careful examination of their interiors could provide unique insights concerning the evolutionary history of the Moon.

In 2009, large, deep vertical holes were discovered at Marius Hills, Mare Tranquillitatis, and Mare Ingenii using lunar surface image data acquired by the high-resolution Terrain Camera (TC) onboard SELENE (Kaguya). Later, higher resolution nadir and oblique angle observations performed by the Lunar Reconnaissance Orbiter Narrow Angle Camera confirmed that the floor of the holes extends at least several meters eastward and westward under the ceiling. The three biggest holes on the Moon are possible skylights opening into an ample space. However, whether these large spaces are subsurface lava tubes is still unknown.

The Lunar Radar Sounder (LRS) onboard SELENE consists of two sets of dipole antennas transmitting electromagnetic (4-6MHz) waves and receiving echoes from the Moon. We used radar echo data from the LRS to investigate the existence of underground lava tubes at Marius Hills (Figure 1). 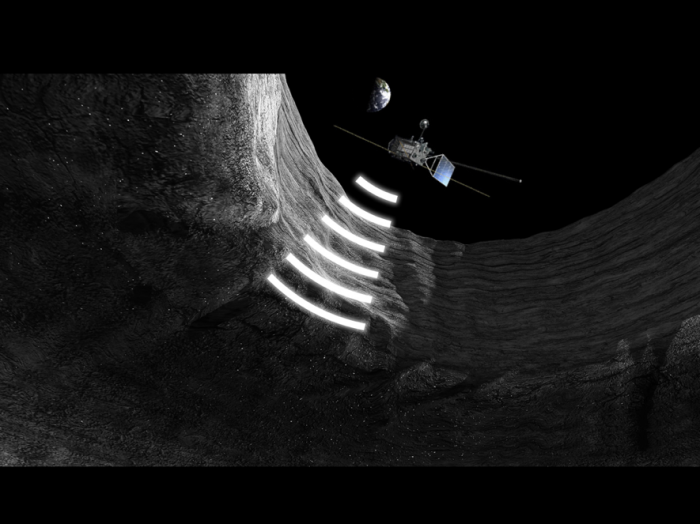 Figure 2 plots a typical LRS echo power data profile in a mare region (13.715°N, 304.010°E). The time differences of received echoes were converted to corresponding depths where the LRS transmitted EM waves by the LRS were reflected. The largest echo peak (red point) is from the nadir surface of the Moon. The dielectric constant used here for converting time to depth is unity (1) as if it were a vacuum. The true location of the deflection is, therefore shallower than tentatively given with the vacuum dielectric constant value. 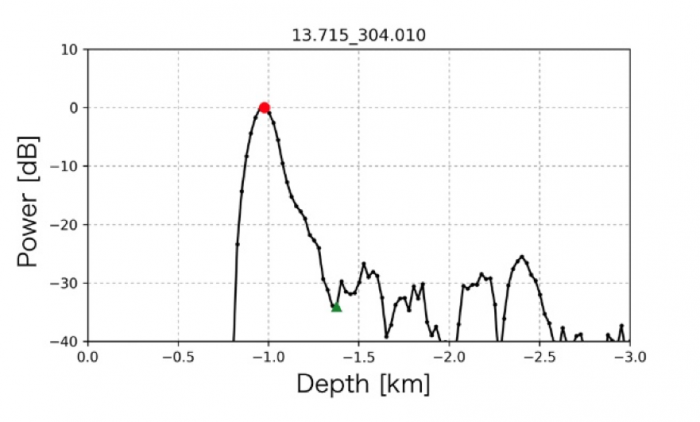 We first investigated the LRS data from a SELENE orbit approaching the Marius Hills Hole (MHH) (14.100°N, 303.262°E) and found a strong echo from subsurface at a depth of 225 m from the surface close to MHH (second echo on the right side in Figure 3). Prior to the second echo peak, the received echo power precipitously decreased ("No echo" point on the right side in Figure 3). This echo pattern implies the existence of a cave, such as an underlying lava tube. When we assume a dielectric constant of 4 or higher, an appropriate value for lunar subsurface materials, we obtain a depth of 100 m or shallower from the surface. 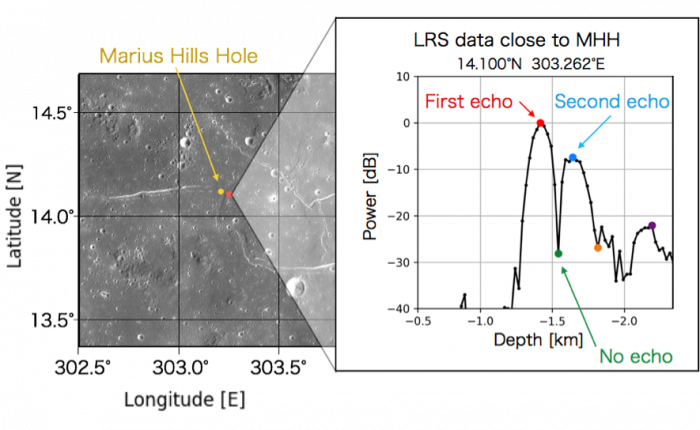 Figure 4 presents the locations of candidate sites of possible subsurface caves. The background of the figure is an image from the SELENE TC. The gray lines correspond to the LRS observation tracks. The circular points on these lines indicate locations where strong subsurface echoes are observed. The color of the circular points denotes the power difference between the first and second echo peaks (ΔPrb). Some of the candidate cave sites are aligned along rille A formed by lava flows (T1, T2) and on a possible extension of rille A (T3 and T4). The locations (T1~T4) are a possible lava tube, in which the MHH was discovered, and on a possible underground extension southwest of the rille to about 50km. 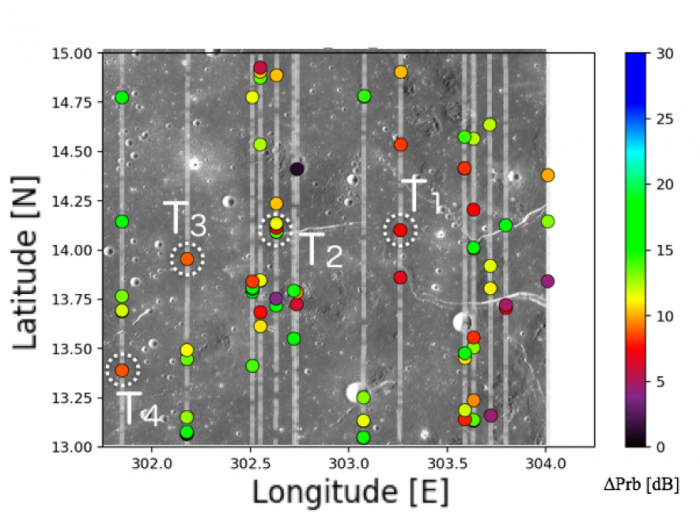 Figure 4. The locations of candidate sites of possible subsurface caves. 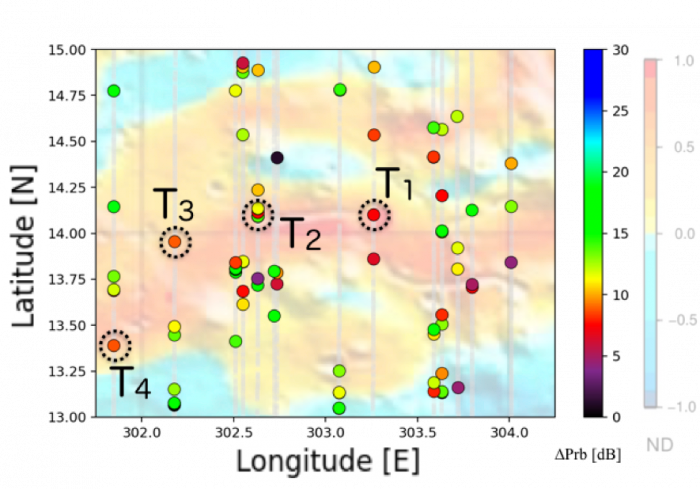 In this study, we identified candidate sites for the presence of significant intact lava tubes. These sites are intriguing from a science perspective and may offer potential sites for future lunar base construction around the Marius Hills Hole.

In the future, we will expand our search to other regions on the Moon where additional subsurface lava tubes may be present. We will also continue to investigate the origin and history of known candidate lava tubes using composition, topography and magnetic field data to direct future exploration of lava tubes or lunar base construction.