The energy source of vibrant auroras is solar wind. Above the ionosphere, where the auroral light emission occurs, is the magnetosphere that is controlled by the Earth's magnetic field. The interaction between the magnetosphere and solar wind that changes with time results in dynamic phenomena such as magnetic storms and changes in state of the radiation belt. The basic paradigm for such space weather phenomena is taking in the solar wind energy through the magnetopause, accumulation of energy in the magnetotail, energy consumption in the radiation belt and in the form of aurora phenomena, and discharge of energy into interplanetary space (see Figure 1). In order to clarify this mechanism of energy metabolism in the magnetosphere that behaves like a living organism, researches are being carried out every day. 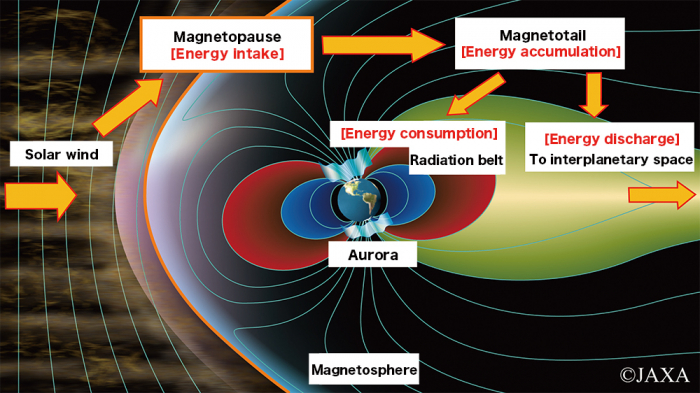 Figure 1. Flow of plasma energy around Earth's magnetosphere. Solar energy absorbed through the magnetopause circulates in the magnetosphere and becomes energy that generates the radiation belt and auroras.

Needless to say, the magnetosphere is completely different from a life form. However, the magnetosphere shares the same characteristics as living organisms in the sense that "there exists a very clear outer boundary and they can be defined as an isolated individual," and "they take in energy from the external environment, convert energy into various forms, use it for their own activity, and discharge it to the external environment." It is interesting and curious that the magnetosphere, which is filled with an aggregate (plasma) of simple constituents such as electrons, protons, and minor ions including helium ions and oxygen ions, shows complex and diverse behaviors in a manner similar to organisms that also show a complicated behavior despite the fact that they are made up of a group of relatively simple cells. Studying space plasmas and the magnetosphere will not only allow us to understand the near-Earth space and contribute to human activities in space and those that utilize space, but also deepen our insights into life and human beings.

"Seeing is not as good as touching or tasting"

The sun as the origin of energy in auroras and auroras as the destination can be viewed with our eyes, and their measurement is possible by taking images with telescopes and cameras. However, the flow of solar wind energy and most of the metabolism phenomena that occur in space between the Sun and auroras cannot be observed by means of electromagnetic waves. Therefore, we send satellites with scientific instruments into space in order to obtain information on the space environment; the magnetometer onboard the satellite is exposed to the magnetic field in space and the plasma instrument is used to capture in itself and "taste" ambient ions and electrons. Thus, our research philosophy is not "seeing is believing" but rather "seeing is not as good as touching or tasting".

Unfortunately, the energy metabolism processes in the magnetosphere cannot necessarily be measured by simply controlling the attitude and position of satellites. We can only turn on the scientific instruments at times and locations on orbit where interesting phenomena are likely to happen and then wait until they are actually measured. Consequently, in order to discover what we are looking for, we need to patiently and carefully perform in-depth analysis of measurement data over a long period of time (sometimes over many years). On the other hand, the old GEOTAIL satellite, which became 24 years old as of July 24, 2016, can still happen to enter an important region of space and serendipitously discover new phenomena. The following research accomplishments are based on cases in 2015 in which the magnetopause happened to be observed simultaneously by GEOTAIL and NASA's MMS satellites.

The largest scale magnetic reconnection in the magnetosphere

Magnetic reconnection is a physical process in which energy of the magnetic field is converted into the kinetic and thermal energy of plasma, and therefore plasma is accelerated. This accelerated plasma was observed simultaneously by GEOTAIL and MMS on October 2, 2015 (as shown in Figure 2). We found out that magnetic reconnection occurred over a wide range of at least 70,000 km in the east-west direction (11 times the Earth radius) and over a long period of at least five hours. The former observation indicates that the mouth was open over about 1/4 of the width of the magnetosphere (about 300,000 km). Auroras are known to repeat active and quiet periods every three hours or so, and it is surprising that the magnetosphere continues to take in solar wind over durations longer than this auroral cycle. 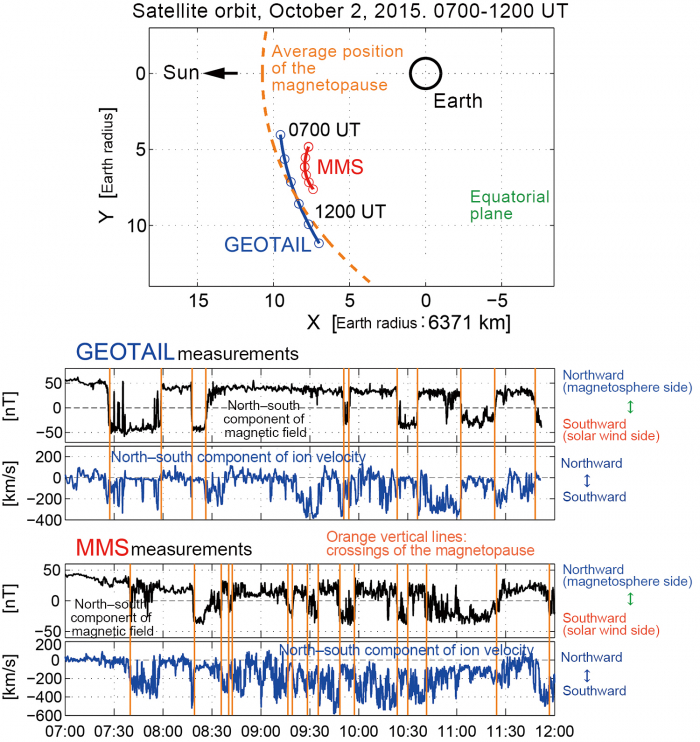 Figure 2. Simultaneous observation of magnetic reconnection by GEOTAIL and MMS on October 2, 2015. The direction of the solar wind magnetic field was southward, and the moment at which the north-south component of the magnetic field reverses sign corresponds to a crossing of the magnetopause. Fast southward ion flows of about 400 km/s were detected on the magnetospheric side of all the encountered magnetopause crossings, which indicates that magnetic reconnection persisted for a long time.

The magnetosphere loses appetite in summer and winter

When seasons change, animals and human beings gain or lose weight. They may also become more active or hibernate instead. Similarly, the magnetosphere becomes more active or quiet with changes in season. The magnetosphere is known to become more quiet in summer and winter than in spring and fall. The detailed reason is not well known, although hypotheses include a decrease of solar wind energy intake and decrease in the intake efficiency. Simultaneous measurements by GEOTAIL and MMS that have provided clues into this problem occurred on November 18, 2015. 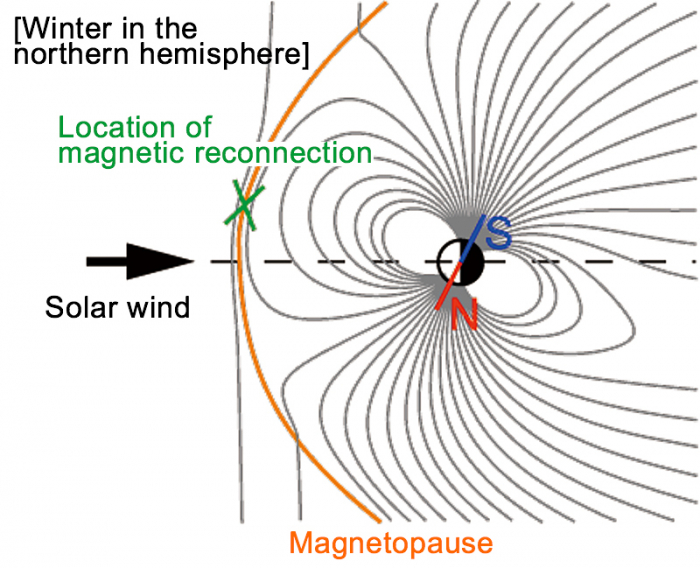 Figure 3. Simultaneous measurements by GEOTAIL and MMS on November 18, 2015, corresponding to winter in the northern hemisphere, revealed that the location of magnetic reconnection shifts to the winter hemisphere side.

Toward a comprehensive understanding of energy metabolism

The research introduced here considers the energy intake, which is the first step of the solar wind energy flow as shown in Figure 1. Follow-up studies are necessary to completely understand the energy flow. First, the speed of magnetic reconnection (the speed of eating) that governs the energy intake efficiency should be estimated by observations, and the mechanism that controls the speed should be elucidated. The amount of energy intake cannot be determined unless the spatial extent, duration, and speed are all uncovered. We also need to clarify the factors that control the location, i.e., to understand why the location of magnetic reconstruction shifts to the winter hemisphere side.

The chain of processes from the energy accumulation to consumption occurs in the magnetotail and the inner magnetosphere where the radiation belt resides. There are many problems that remain to be solved there. The Geospace exploration satellite ERG, which is planned to launch this winter, aims to clarify the process whereby electrons are accelerated to extremely high energies of more than 99% of the speed of light in the radiation belt, and the main observation target is the energy consumption. Magnetic reconnection is also known to occur in the magnetotail and to contribute to the energy consumption and discharge; however, there are many open questions, such as when and how magnetic reconstruction occurs on the night side and how the energy and plasma, sufficient to maintain and vitalize the radiation belt, are pumped into the inner magnetosphere. Aurora break-up, which is a rapid and large-scale increase in the emission intensity, is a phenomenon known to be associated with the sudden occurrence of magnetic reconnection in the magnetotail. However, recent GEOTAIL measurements revealed that magnetic reconnection in the magnetotail can persist for a few hours and thus the magnetosphere can continue to discharge energy that was taken in previously. MMS is planned to primarily observe the magnetotail after 2017, which would allow us to investigate the problem of energy consumption and discharge in this region. There seem to be many things that the old GEOTAIL can still do: it can work together with the newer ERG and MMS to uncover the ecology of the magnetosphere.

MMS: Magnetospheric Multiscale, a group of four identical satellites (launched by NASA on March 13, 2015) that fly in formation to observe the Earth's magnetosphere. The aim is to uncover the fundamental physical processes of magnetic reconnection by direct measurements using plasma and electromagnetic field instruments, including electron sensors with a temporal resolution two orders of magnitude higher than conventional instruments.