Nano Phenomena are Key to Formation of Carbonaceous Dust 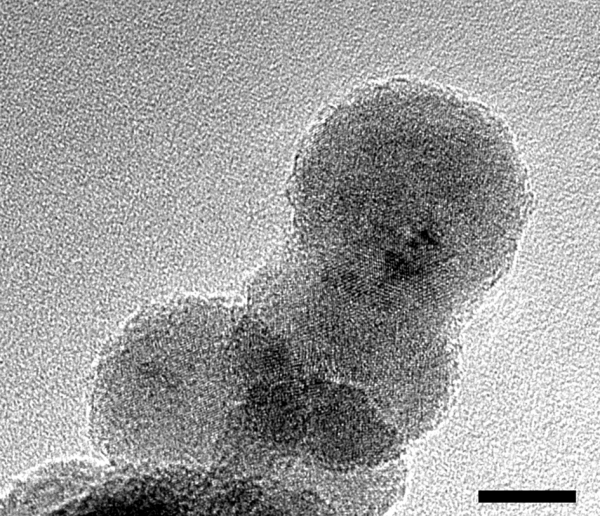 Outer space contains large quantities of nanoparticles, called dust, less than 100 nm in diameter, which eventually become the material for planetary systems. Astronomical observations have shown that cosmic dust is formed from heavy elements (heavier than hydrogen and helium) contained in the gas ejected by dying stars, such as supernova explosions and late-type giant stars. However, the formation process of cosmic dust has not been theoretically explained in terms of particle size, structure, and other characteristics.

It is very difficult to study directly how cosmic dust forms in the environment around a dying star in-situ. The only way to investigate this process is through theoretical studies or experiments and observations in simulated environments. To address this issue, the research team led by KIMURA Yuki, a materials science researcher at Hokkaido University, conducted a microgravity experiment on titanium carbide, a mineral in which carbon plays a major role in its formation, to reproduce the formation process of its particles.

To understand the formation process of cosmic dust

The research team investigated the formation process of titanium carbide nanoparticles with a core-mantle structure (where the particles have a distinct central and surrounding region with different composition and properties: hereafter referred to as "core-mantle particles") in a microgravity environment and found that nanophenomena found only in the microscopic world are key to the formation of carbonaceous dust. Their findings were published in Science Advances.

You might think that the formation of cosmic dust is just a matter of gases coming together to form a solid. So why is it so difficult to understand this process? The research team believes that the main reason lies in the "physical properties specific to nanoparticles". Dust formation proceeds in the nano-size range (1 to 100 nanometers), which cannot be explained by macroscopic solid-state physics. When the size of a material is reduced to the nano-region, the surface area per unit volume becomes so large that its surface has a different bonding state between atoms and molecules than the interior, resulting in a higher energy state. As a result, nanoparticles are known to exhibit properties different from those of macroscopic solids, such as changes in surface tension, faster diffusion, and lower melting point. Nevertheless, until now, the formation of cosmic dust has been studied under the assumption that the physical properties of nanoparticles are the same as those of macroscopic solids.

Microgravity experiment is an important tool

The research team conducted a sounding rocket experiment in cooperation with Japan and Europe as part of the "DUST (Determining Unknown yet Significant Traits)" project, as part of JAXA's small-scale program. In this experiment, titanium and carbon were vaporized at high temperatures in a reproduction of the conditions for cosmic dust formation under the microgravity environment created by the parabolic flight of a sounding rocket for a few minutes. As the gas consisting of carbon and titanium atoms cooled, nanometer-sized particles (simulated cosmic dust) are formed via nucleation(*). Under a microgravity condition, the effect of convection in the gas is negligible, and the fine particles float in the gas. The formation of fine particles as the temperature and concentration distribution in the gas changes with time was observed in real time using an optical method.

* Nucleation: The phenomenon in which a new phase emerges as small particles from gas or liquid in a supersaturated or supercooled state. The probability of atoms and molecules sticking to each other (hereafter referred to as "sticking probability"), and surface tension are the physical property values with the most uncertainty when performing calculations based on nucleation theory.

When attempting to reproduce the region of dust formation around a dying star by heating and evaporating the dust material on the ground, convection is created due to the distribution of concentration and temperature in the gas. As a result, large spatial inhomogeneity occurs in the environment where dust is formed. In microgravity, on the other hand, nucleation occurs under a homogeneous condition because the evaporating gas diffuses isotropically from the evaporation source. Therefore, a microgravity experiment is an important tool in the study of dust formation.

In June 2019 the European sounding rocket MASER 14 was launched and the experiment was performed as planned. The recovered experimental samples were analyzed in nanoscale detail using transmission electron microscopy. The team then examined the process of core-mantle particle formation in the gas, based on the latest theories of nucleation.

Focus on nano phenomena found only in the microscopic world

The team found that for carbonaceous nanoparticles, the sticking probability is much smaller, and the surface tension is larger, than the values used in previous models. Applying these physical quantities and estimates of the gas emitted by the dying star (temperature, number density of carbon and titanium atoms) to the theory of nanoparticle nucleation and crystal growth, they found that the formation of core-mantle particles undergoes the following three-step process.

Atoms and molecules diffuse faster in nanoparticles than in the interior of macroscopic solids. And around the dying star, the number density of carbon atoms is much higher than that of titanium atoms. Therefore, in the second step mentioned above, titanium atoms on the particle surface are quickly incorporated into the core as titanium carbide while carbon atoms continue to stack up around the core to maintain the mantle.

Until now, it has not been possible to explain why a core-mantle structure with titanium carbide nanocrystals in the center appears in carbonaceous dust. The results of this research will lead to the establishment of a theoretical method to explain the characteristics of cosmic dust. It also provides a new interpretation of the formation process of particles found in meteorites that formed 4.6 billion years ago to form the Solar System and dust detected by astronomical observations, focusing on the nucleation and rapid diffusion of the constituent elements and the fusion of particles with each other, which are nano phenomena.

As the late Ukichiro Nakaya of Hokkaido University expressed, "Snow is a letter from the sky", a relationship diagram that quantitatively shows that the shape of snow crystals varies greatly depending on the temperature and the degree of supersaturation of water vapor of the upper atmosphere is known as the Nakaya Diagram. Similarly, by accurately measuring the physical properties and behavior of the various nanoparticles that make up cosmic dust and comparing them to the results of astronomical observations, we may be able to create a diagram in the future that reveals the formation environment of cosmic dust in meteorites from its characteristics.

Knowledge of the nucleation process and the physical properties of nanoparticles is essential not only for understanding particles formed in various celestial bodies such as planetary nebulae, supernovae, and planetary atmospheres, but also for understanding nanoparticle formation on the ground. And the multi-step substance formation through nucleation revealed by the research team is a new idea that has been reported in various fields in recent years and has implications for a wide range of research fields related to materials science. As already mentioned, nanoparticles exhibit properties different from those of macroscopic solids, and research and applications of nanoparticles in various fields such as electronics, optics, medicine, and surface science have been rapidly increasing in recent years. The understanding and application of nanophenomena has the potential to open new doors to unexplored areas of science and technology.