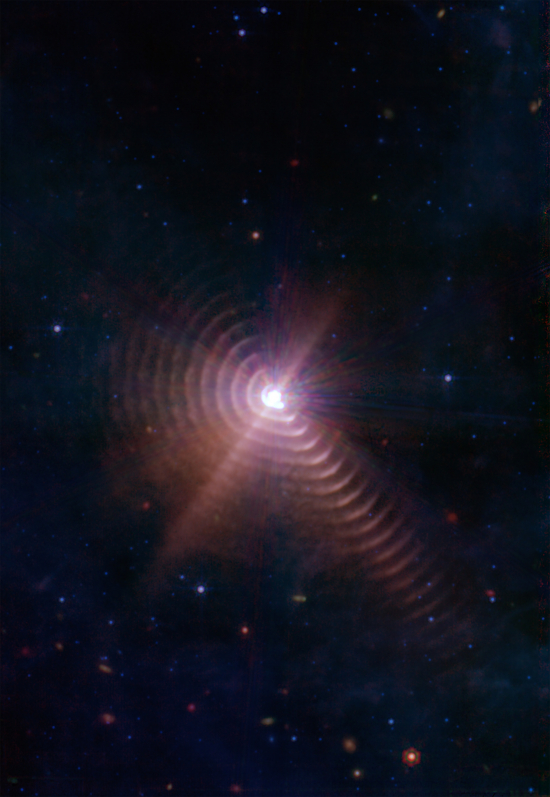 A new image with the James Webb Space Telescope shows at least 17 dust rings created by a rare type of star and its companion, locked in a celestial dance.

A new image from the NASA-led James Webb Space Telescope reveals a remarkable cosmic sight: at least 17 concentric dust rings emanating from a pair of stars. Located just over 5,000 light years from Earth, the duo is collectively known as Wolf-Rayet 140. Each ring was created when the two stars came close together and their stellar winds (streams of gas they blow into space) collided, compressing the gas and forming dust. The stars' orbits bring them together about once every eight years; like the rings of a tree's trunk, the dust loops mark the passage of time.

"We're looking at over a century of dust production from this system," said Ryan Lau, who completed the majority of the preparatory work for this observing program while he was an ITYF research fellow at ISAS. Lau is now an astronomer at NSF's NOIRLab and lead author on a new study about the system. "The image also illustrates just how sensitive JWST [Webb telescope] is. Before, we were only able to see two dust rings, using ground-based telescopes. Now we see at least 17 of them."

In addition to Webb's overall sensitivity, the telescope's Mid-Infrared Instrument (MIRI) that was used by the team is uniquely qualified to study the dust rings. Webb's science instruments detect infrared light, a range of wavelengths emitted by warm objects and invisible to the human eye. MIRI detects the longest infrared wavelengths, which means it can often see cooler objects compared to Webb's other instruments, including the dust rings, which Lau and his colleagues call "shells", because they are actually thicker and wider than they appear in the image. MIRI's spectrometer also revealed the composition of the dust, formed mostly from material ejected by one of the stars in the observed duo, whose type is known as a Wolf-Rayet star.

A Wolf-Rayet star is born with at least 25 times more mass than our Sun and is nearing the end of its life. Burning hotter than in its youth, a Wolf-Rayet star generates powerful winds that push huge amounts of gas into space. The Wolf-Rayet star in this particular pair may have shed more than half its original mass via this process. 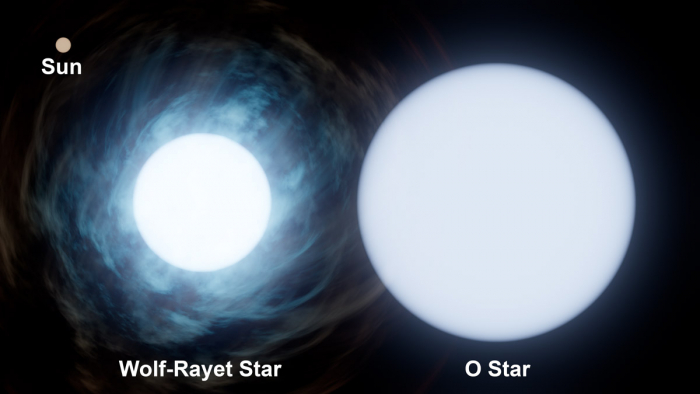 This graphic shows the relative size of the Sun, upper left, compared to the two stars in the system known as Wolf-Rayet 140. [Credit: NASA/JPL-Caltech]

Forming Dust in the Wind

Transforming gas into dust is somewhat like turning flour into bread: It requires specific conditions and ingredients. The most common element found in stars, hydrogen, can't form dust on its own. But because Wolf-Rayet stars shed so much mass, they also eject more complex elements typically found deep in a star's interior, like carbon. The heavy elements in the wind cool down as they travel into space and are then compressed where the winds from both stars meet, like when two hands knead dough.

Some other Wolf-Rayet systems form dust, but none is known to make rings like that of Wolf-Rayet 140 (WR 140). The unique ring pattern forms because the orbit of the Wolf-Rayet star in WR 140 is elongated, not circular. Only when the stars come close together--at about the same distance between Earth and the Sun--and their winds collide, is the gas under sufficient pressure to form dust. Wolf-Rayet binaries that have circular orbits can produce dust continuously, which does not create a ring system.

Lau and his co-authors think WR 140's winds also swept the surrounding area clear of residual material that they might otherwise collide with, which may be why the rings remain so pristine and not smeared or dispersed. There are likely even more rings that have become so faint and dispersed that not even Webb can see them.

Wolf-Rayet stars may seem exotic compared to our Sun, but they may have played a role in our existence. When winds from a Wolf Rayet star clear an area, the swept-up material can pile up at the outskirts and become dense enough for new stars to form. There is some evidence that the Sun formed in such a scenario.

What's more, with MIRI's spectroscopy data, the new study provides the best evidence yet that Wolf-Rayet stars could be significant sources of carbon throughout the Universe. Dust and gas coalesce to form planets, so carbon-rich molecules in the dust could also be incorporated into the planet. The preservation of the dust shells indicates that this dust can survive in the hostile environment between stars, going on to supply material for future stars and planets.

The catch is that while astronomers estimate that there should be at least a few thousand Wolf-Rayet stars in our galaxy, about only 600 have been found.

"Even though Wolf-Rayet stars are rare in our galaxy because they are short lived as far as stars go, it's possible they've been producing lots of dust throughout the history of the galaxy before they explode and form black holes," said Patrick Morris, an astrophysicist at Caltech in Pasadena, California, and a co-author of the new study. "I think with JWST we're going to learn a lot more about how these stars shape the material between stars and trigger new star formation in galaxies."

"The short-lived Wolf-Rayet stars such as WR140 likely existed in the early Universe," said Hideo Matsuhara, at ISAS, JAXA (a co-author of this new study). "I think this discovery will facilitate astronomers who are interested in the evolution of matter in the Universe.

The James Webb Space Telescope is the world's premier space science observatory. Webb will tackle mysteries in our Solar System, look beyond to distant worlds around other stars, and probe the intriguing structures and origins of our Universe and our place within it. Webb is an international program led by NASA, ESA (European Space Agency), and the Canadian Space Agency.

The JAXA International Top Young Fellowship (ITYF) is the prestigious fellowship program at ISAS JAXA for early career researchers. The program aims to support upcoming leaders in space science in tackling the challenging scientific and engineering development needed to develop missions to understand our Universe.

Cosmos post by Dr Ryan Lau: A new era for astronomy opens with the Webb Telescope

For more information about the Webb mission, visit: https://www.nasa.gov/webb