Creating water simply on the surface of a celestial body 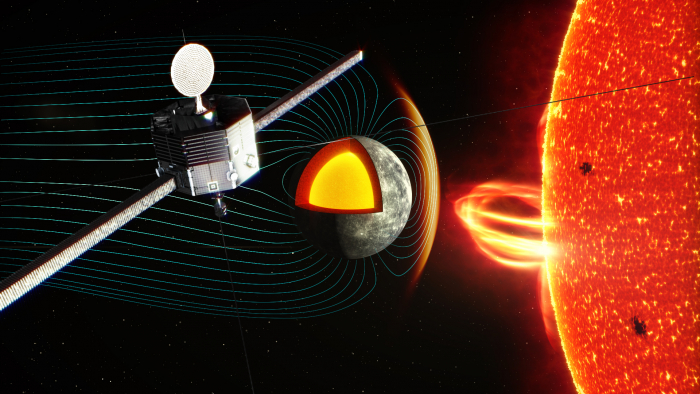 Illustration of the BepiColombo MIO orbiter observing the plasma environment near the surface of Mercury. While the surface of the Earth is protected from the solar wind by the planet atmosphere and magnetic fields, the Moon has neither atmosphere or magnetic field, and so the solar wind falls directly on the lunar surface. The situation is similar on Mercury, as the planet has no atmosphere and only a weak magnetic filed, so the interaction between the celestial surface material and the ions in the solar wind as described in this article is a major research theme for the mission. Credit: JAXA

A research team led by Yusuke Nakauchi (JAXA) have conducted experiments which demonstrated that water molecules (H2O) can be generated on the Moon and in the surface layer of small bodies when hydrogen ions emitted from the Sun collide with the silicate material (the main mineral found on the Earth, Moon and other small celestial bodies) of the lunar surface.

In recent years, observational data from lunar explorers have reported the existence of "Moon water", leading to a discussion about the possibility that OH or H2O molecules are being produced in the irradiation of the surface of the Moon by the solar wind. While it has been collectively referred to as "Moon water", it has been unclear whether the presence of OH groups or H2O was being detected. Experiments have previously been conducted to simulate the irradiation of the lunar surface by the solar wind and reported that H2O can be generated through a micrometeoroid impact after irradiation by hydrogen ions. In these new experiments by Nakauchi et al., it was found that hydrogen ion irradiation alone can be enough to generate H2O. These results show that H2O can be generated in a very simple reaction on the Moon and in the surface layer of small bodies which are directly exposed to hydrogen ions from the solar wind.

One of the leading theories for the creation of the Moon is that our satellite was formed during a giant impact between the Earth and a large Mars-sized object. According to the giant impact theory, the formation collision led to an epoch where the entire Moon's surface was covered with magma, and it is suspected that volatile components such as water were depleted from the Moon's composition at this time. This therefore suggested that there was no water on the Moon. However, the analysis of lunar observational data in recent years has strongly suggested that water (OH groups or H2O) may be present over a wide area of the lunar surface (e.g. C. M. Pieters et al., 2009). Discussions concerning the origin of this water have proposed delivery via small bodies (such as comets and asteroids) after the Moon's formation, or that it is generated in a reaction between hydrogen ions in the solar wind and lunar materials. Of these options, experimental research on the latter possibility has been conducted across the globe.

The solar wind (the high-speed flow of gas (400 km/s) that originates from the Sun, mainly consisting of hydrogen ions and electrons) fills the space of the Solar System. As the surface of the Moon, and other airless bodies such as asteroids, have no atmosphere, the solar wind falls directly upon the minerals of their surface. It is expected that the hydrogen ions in the solar wind and the oxygen ions contained in the minerals on the surface of the Moon should be able to combine to result in the formation of OH groups and H2O. Since the existence of water on the Moon has attracted considerable interest as a possible resource, it is particularly important to understand the quantity and location, as well as H2O generation mechanisms that could lead to easier implementation of in-situ resource utilization.

In their research, Nakauchi et al. asked how can water be formed on the surface of the Moon or asteroids which do not support an atmosphere? To solve this question, the team investigated the formation process of OH groups and H2O by reactions mediated by materials existing on the surface of an asteroid.

In this study, the surface of the celestial body was simulated using a powdered sample of hydrous silicate mineral (Serpentine and Saponite) found in carbonaceous chondrites. This was installed in a high vacuum environment chamber and irradiated with a hydrogen ion beam (H2+, 10keV) to simulate the protons in the solar wind. The formation process of OH and H2O through the irradiation by the hydrogen ion beam was investigated by detailed examination of the changes in the near-infrared reflection spectrum.

The experiment was conducted in collaboration with the Wakasa Wan Energy Research Center in Fukui Prefecture, utilizing the research center's microwave ion source implementation device and the Fourier Transform Infrared Spectrometer (FTIR). We are very grateful for the support we received in using the ion beam accelerator for studying and implementing the generation and acceleration of the hydrogen ion beams during the irradiation tests and methods.

By examining the change in the near-infrared reflection spectrum before and after the irradiation with hydrogen ions, it was confirmed that Si-OH and H2O are generated by irradiating hydrous minerals with hydrogen ions simulating the solar wind protons, via the destruction of the Si-O bond in the mineral. Although the hydrous silicate mineral also contained a metal-OH bond, there was no observed change in the wavelength range associated with the abundance of the metal-OH in the near-infrared reflection spectrum. From these results, the formation process of H2O is thought to be as follows:

(1) Irradiating hydrogen ions destroy the ...O-Si-O-Si-O... bonding in the crystal structure of the silicate minerals (Figure B).

The results from this research were published in Icarus in February 2021 (available on line from October 2020).