The solar flare is an explosion occurring on the solar surface, which is the most energetic events in the solar system. The origin of solar flares is the magnetic fields of the sun, which can store the energy by twisting and deforming. In solar flares, the physical mechanism called magnetic reconnection converts the energy stored in the magnetic fields to thermal and kinetic energy of the plasma in a very short time. In the active regions where large magnetic flux concentrations (i.e., sunspots) are formed, a large amount of energy is stored in magnetic flux, producing many large-scale flares. However unfortunately, we have no knowledge to predict when, where the flares happen, nor the scale of them. It is just because we have not physically understood the trigger mechanisms of the flares.

Since 2008, there have been abnormal signs showing the possibility that solar activity would decrease in the future, being a hot topic. Solar activity changes in an 11-year cycle (Figure 1). In the solar minimum around 2008-2009, we could not observe any sunspots in a long period and the number of no sunspot days reached the most in the past 100 years. This suggested that the solar activity would also be low during the solar maximum around 2013-2014. In fact, the number of sunspots appeared on the solar surface in this maximum is about only the half of the previous cycle. Furthermore, most of the appeared sunspots are small and in simple magnetic structure and the occurrence frequency of large-scale flares has remained low. 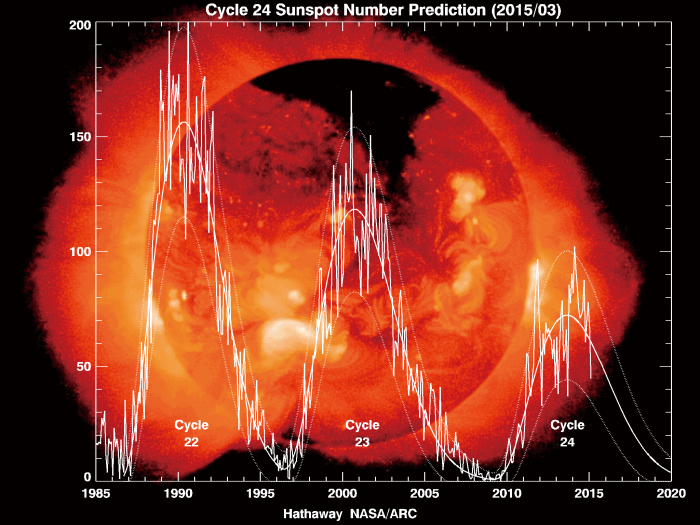 "Hinode" was launched in September 2006 and succeeded in observing series of the large-scale flares occurred at the last phase of the previous solar cycle in December 2006. After a long minimum period, large-scale flares started to occur from 2011. Though in 2008, the amount of data we can acquire was significantly reduced due to malfunction in the onboard communication device, we have made efforts in operations to catch the flares, which are difficult to predict when and where it would appear, with narrow field-of-view telescopes, and the number of flares successfully observed has increased. For instance, when the giant sunspot group appeared on the solar disk in October 2014 for the first time in recent 24 years (cover photo of the ISAS News January 2015 No.406 Issue), the spot produced 6 large-scale flares called X-class flares, 5 of which were successfully observed with Hinode. Now although the solar activity cycle phase has already passed its maximum, we are going to get more observation samples for statistical research.

A Scenario on the Occurrence of Flares

Based on observations and theoretical researches, many solar physicists imagine the scenario given in Figure 2 for the occurrence of eruptive flares. With the evolution of the magnetic flux by flux emergence from below the surface and thermal convective motions at the surface, A magnetic rope (*1) may be formed and grown in the corona. At this moment, the distribution map of magnetic flux at solar surface (on the right of the cover) shows a magnetic structure where positive and negative magnetic fluxes deviate from the bipolar structure (magnetic field distribution like that of a bar magnet).

Figure 2: An overall scenario on the occurrence of solar flares.

In such magnetic structure, energy is stored as it is sheared, and it gradually loses its magnetohydrodynamics (MHD) stability. Furthermore, when magnetic reconnection happens somewhere in this system, the instability and magnetic reconnection dynamically synergistically develop, resulting in rapidly accelerating the release of the stored energy. The magnetic structure develops until the magnetic rope is erupted upwards, observed as filament eruptions (*2) or coronal mass ejections (*3).

The soft and hard X-ray observations by the Yohkoh satellite, launched in 1991, provided a piece of evidence strongly supporting the existence of magnetic reconnection and since then, it has been recognized as the energy conversion mechanism in flares. However the time scale of magnetic diffusion in the solar corona is too long to explain the short time scale of flares, which is often several tens of seconds to less than 20 minutes. As a result, investigations on the physics of the "fast" magnetic reconnection are being conducted together with observations, theoretical end experimental researches.

Furthermore, what we do not understand is the mechanism developing flares, that is, the physical mechanism to trigger the synergistic development of magnetic reconnection and the instability. Recently, it became able to conduct large scale numerical simulations, enabling to investigate the processes from flare triggers to coronal ejections on simplified model magnetic structures. Prof. Kanya Kusano of Nagoya University and his collaborators conducted a parameter survey to find the conditions of magnetic structure for making flare eruptions; A small bipolar magnetic flux in various orientation is given on the polarity inversion line (*5) of various sheared (*4) coronal magnetic structures. They pointed out that two types exist in erupting flares: Opposite-Polarity type and Reversed-Shear type, which are different from each other in the azimuth of the bipolar field towards the sheared coronal magnetic field. The small bipolar flux is considered to be trigger field, which is the start point of flares.

Are we able to identify trigger fields through observations? Do we observe flares under the magnetic conditions predicted by theories? Yumi Bamba from Nagoya University and her collaborators are trying to identify small trigger fields by analyzing the magnetic field maps at the solar surface derived from the precise and high-resolution spectro-polarimetric measurements with the Solar Optical Telescope (SOT) onboard "Hinode". They developed a method using chromospheric heating (brightening) resulted from initial magnetic reconnection as markers, and succeeded in identifying both the Opposite-Polarity and Reversed-Shear types of trigger fields, although only four examples have been identified. We need more flares to do statistical research to know whether it is general. Although the number of the observed flares is limited because of the narrow field of view of Hinode, the magnetic field maps from the SDO (Solar Dynamics Observatory), launched in 2010, should be useful for statistical research. The resolution and precision are lower than Hinode, but SDO's field of view covers the entire solar disk all the time, so it should observe almost all the large scale flares. While investigating the possibility to detect the trigger fields by applying the trigger field identifying method to the SDO data, we find it seems possible to identify the trigger fields when their size is larger. However, relatively large uncertainties exist so that we need Hinode's spatial resolution and accuracy in magnetic field maps. Thus, by making full use of the advantages of Hinode and SDO and complementarily using the data from the both, great improvement is expected in the research on the triggers.

It is important to understand the formation of trigger fields to reveal when and how the flares occur. Empirically, large scale flares may be produced when the complicated configuration is developed in sunspots due to magnetic fields emerging from below the solar surface. Dr. Toshifumi Shimizu and his collaborators found interesting dynamical behaviors in a Reversed-Shear type flare, from precise observations of magnetic and velocity fields with Hinode. 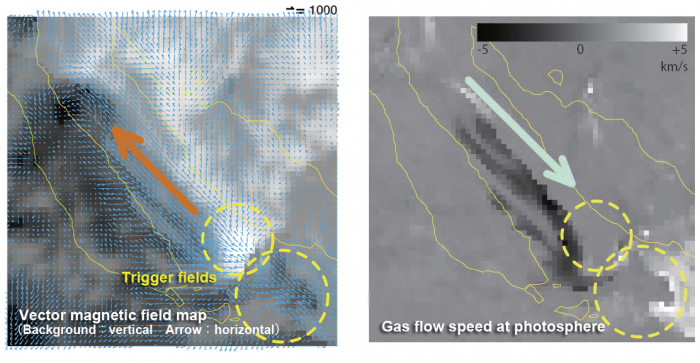 It is also important to understand the destabilization of coronal magnetic field. Dr. Shinsuke Imada of Nagoya University and his collaborators successfully captured with the simultaneous extreme ultraviolet spectroscopy and imaging observations from Hinode and other spacecrafts that the coronal gas (magnetic field) is slowly losing its stability during the large scale flares of Opposite-Polarity type. Half a day before the flare, the low-density faint coronal structures around the flare have slowly expanded and the high-density bright coronal structures started to expand several hours before the flare. This finding suggests that the coronal magnetic structures around the flares change slowly and finally result in the occurrence of flares.

In numeric simulations, the Opposite-Polarity type and Reversed-Shear type flares are quite different in the processes when they develop from triggers to large scale eruptions of coronal gas. In the Reversed-Shear type flares, the growth and changes of small trigger fields cause magnetic reconnections at the base of the corona on the start of the flares. In the Opposite-Polarity type, the flares start with a rinsing magnetic rope, which is caused by the destabilization of the coronal magnetic structure through the reconnections in the chromosphere. The observations discussed, i.e., the formation of trigger fields and expanding coronal structures, are consistent with the predictions in simulations.

On the other hand, looking into the observation data from Hinode, we can know many flares that we are unable to identify the trigger fields or difficult to classify them into Opposite-Polarity type or Reversed-Shear type. By investigating such various flares, it is important to narrow down the necessary conditions for the occurrence of flares from observations.

This article is based on the 3 referred papers involved in the Hinode special issue, Publications of Astronomical Society of Japan (PASJ) published at the end of 2014. Large scale flares with coronal mass ejections are dangerous since they have influences on heliosphere, geomagnetosphere and our social system. With the collaboration of the latest solar observations, including Hinode, and theoretical researches, any progress in the basic research of science should be helpful in application (space weather forecasting).