The Forefront of Space ScienceThe chemical composition of the Universe on the largest scalesAurora Simionescu, JAXA International Top Young Fellow

The stars are parts of our lives much more than we realize. Essentially, everything that is around us - and in us - was forged a long time ago inside a stellar furnace. All of the chemical elements that are heavier than carbon, the oxygen we breathe, the silicon that makes up the sand on the beach, all originate during the life cycle of stars.

Stars produce these chemical elements through nuclear fusion, the same process that gives them the energy that is radiated in the form of light. Most stars fuse hydrogen atoms into helium, and helium into carbon and oxygen, and end their life as a "carbon-oxygen white dwarf": a really tightly packed ball of atoms for which the pull of gravity is counteracted by the so-called "electron degenerate pressure". This means simply that there is a limit beyond which electrons don't like to be too close to each other; this causes a repelling force that balances gravitational attraction. For the most massive 1% of stars, however, gravity wins over the electron degenerate pressure. These stars go on to transform carbon and oxygen into a cascade of elements, like neon, sodium, magnesium, aluminum, silicon, sulphur, argon, calcium, nickel and iron. This process eventually ends in a big explosion which sends many of the chemical elements that the star had produced in its outer layers hurling into space. For a few days, the dying star shines extremely bright, sometimes brighter than the galaxy that it is a part of, earning it the term "supernova". The most massive and luminous stars burn their hydrogen into heavier elements at a furious pace, and thus run out of fuel quickly, so that this sort of "core-collapse" stellar explosions happen relatively shortly after a new generation of stars has been born.

There is one other way in which stars can become supernovae. This happens when one of the white dwarfs has a companion star, whose atmosphere spills over with time, bringing the white dwarf's mass above the threshold that quantum mechanical forces can support against the squeeze of gravity. Carbon and oxygen then rapidly get transformed into heavier elements up to iron and nickel, and the energy released causes the entire white dwarf to explode and disperse these elements into space. This is called a "type Ia" or "thermonuclear" supernova. This process was thought to take a much longer time than a core-collapse supernova, because the white dwarf first has to form from a lower-mass star, and then requires additional time to accrete matter from its companion before the explosion occurs.

Core collapse and type Ia supernovae tend to produce very different chemical abundance patterns, with the former generating mostly lighter elements like oxygen and magnesium, while the latter are mainly responsible for iron and nickel. Intermediate elements like Si and S are produced in roughly equal amounts by both supernova types. We can then hope that, by measuring the chemical composition of the Universe, we can reconstruct the history of how, when, and where each of the chemical elements so necessary for the evolution of life were produced. Was the early Universe very different than today? Are there parts of the Universe that have a very different composition than ours?

Actually, perhaps counterintuitively, the answer to these questions is best found not by looking at the stars themselves, but rather looking at the intergalactic space. That is because most of the normal matter in the universe, and thus also most of the metals, are presently not contained in stars, but rather in a very hot, diffuse gas that fills the space between galaxies. This is especially true for "clusters of galaxies", the parts of the Universe where the galaxies are packed closest together. In clusters of galaxies, about 90% of all the normal matter is a diffuse gas known as "intra-cluster medium," which is so hot that it shines in X-ray light. The chemical composition of this gas can be measured using X-ray spectroscopy: essentially, different chemical elements in the intra-cluster medium like to emit light at specific energies; based on the wavelength of the spectral emission line, one can identify the ion responsible for producing it, and based on the strength of the line, one can usually infer how abundant that ion is.

I've found this idea fascinating ever since the first year of my PhD: X-raying the chemical content of our Universe. However, back then, almost 10 years ago, it was very hard to obtain reliable measurements of the metal abundances except for the very densest, brightest parts of the intra-cluster medium -- the central few hundred thousand light years, which sounds like a lot but in fact represents only about a thousandth part of the total volume of a typical galaxy cluster. There were some interesting hints that the chemical composition towards larger radii was changing, namely, that the central parts contained more thermonuclear supernova products like iron, while the outskirts of galaxy clusters were enriched just by core collapse supernovae. But it was very hard to tell for sure, since at large radii from the centres, there were very few X-ray photons and a lot of background noise, and different articles often came to different scientific conclusions.

JAXA's Suzaku X-ray satellite dedicated a lot of observing time, collecting data over many weeks, to address this question. Because the background noise of Suzaku is lower than other X-ray detectors that are currently operational, it was able to provide more reliable measurements of the chemical enrichment patterns in the faint, outer regions of clusters of galaxies than was possible ever before. Some of the first results, based on observations of the nearest, brightest system, the Perseus Cluster, showed a remarkably uniform distribution of the abundance of iron in the intra-cluster medium on large scales. This would suggest that the outskirts of clusters of galaxies were not enriched only by core collapse supernovae, as initially hinted at by previous observations, but rather that thermonuclear supernovae must have also played a role. However, in order to really tell what types of supernovae contributed to the metals in the intracluster medium on these very large scales, it was necessary to measure not only the abundance of a thermonuclear supernova product such as iron, but also that of a chemical element predominantly produced by core collapse supernovae, so that the two abundances could be directly compared. This was not possible for the Perseus Cluster because, at the average temperature of the gas in this system, all lines from chemical elements other than iron are very weak and hard to detect. Observations of a galaxy cluster with a lower average temperature would be better for such measurements, because the lines from elements typically produced by core collapse supernovae are comparatively stronger than in the Perseus Cluster.

I therefore proposed to perform a very long Suzaku observation of the Virgo Cluster, the second brightest cluster in the X-ray sky, which has such a suitably low temperature. Indeed, Suzaku spent about two weeks (the same amount of time spent on the Perseus Cluster) looking at this target; with this new data set, we succeeded to detect not only iron but also magnesium, silicon and sulphur all the way to the edge of the Virgo Cluster. What we found was that the ratios between the abundances of iron, silicon, sulphur, and magnesium, are constant throughout the entire volume of the Virgo Cluster, and indeed roughly consistent with the composition of our own Sun and most of the stars in our Galaxy. This means that the chemical elements in the cosmos are very well mixed, with a chemical composition that remains the same from scales of the solar radius (hundreds of thousands of kilometers) to the size of a cluster of galaxies (several million light years). It doesn't seem likely that other parts of the Universe have a very different composition than ours -- so life can evolve in the same way everywhere else! 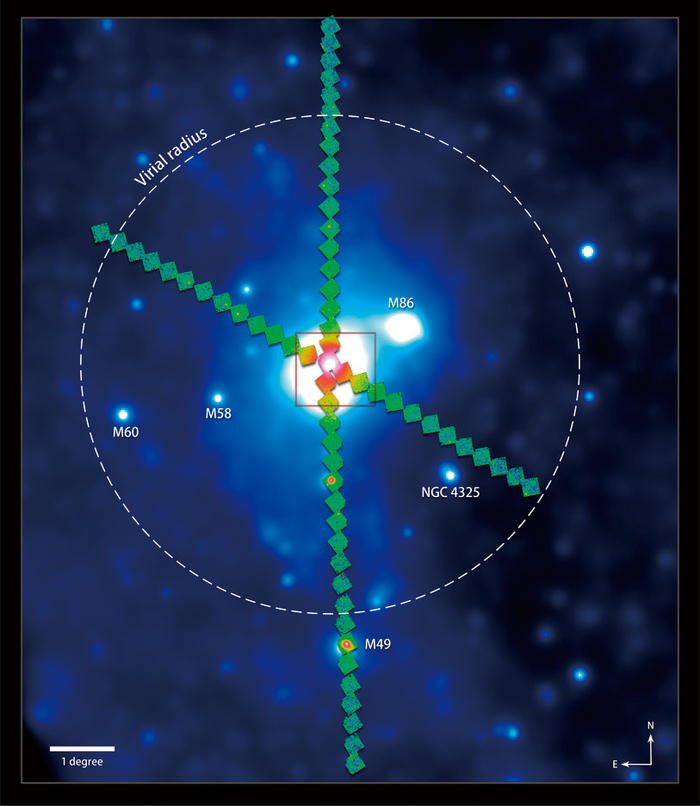 Figure 1. Suzaku mapped four directions all across the Virgo Galaxy Cluster. The northern arm of the survey (top) extends 5 million light-years from M87 (center), the massive galaxy at the cluster's heart. The dashed circle shows what astronomers call the virial radius, the boundary where gas clouds are just entering the cluster. Some prominent members of the cluster are labeled as well. The background image is part of the all-sky X-ray survey acquired by the German ROSAT satellite. The blue box at center indicates the area shown in the visible light image.

Figure 2. This visible light view shows the central part of the Virgo Cluster. The brightest object is the giant elliptical galaxy M87 (left of center). The image spans approximately 1.2 degrees, or about 2.4 times the apparent diameter of a full moon.

Figure 3. Suzaku mapped iron, magnesium, silicon and sulfur all the way to the edge of the Virgo Galaxy Cluster for the first time. The ratios of these elements are found to be constant throughout the cluster, which means they were mixed well early in cosmic history.

Moreover, for the metals to be so well mixed over such large scales, most of the enrichment must have taken place a long time ago. We know that the young Universe underwent a stage of intense star formation about 10 billion years ago, when many supernova explosions took place, and the energy from these explosions, combined with strong winds from active black holes around the same epoch, were probably able to blow the metals out of the galaxies and mix them into the surrounding intergalactic space. This means that the Universe became enriched with metals, produced both by thermonuclear and core-collapse supernovae, and arrived at a similar composition to the one we see today, already when it was a third of its current age: the elements necessary for forming sandy beaches and red blood cells have been plentiful already for a long time -- certainly, much longer than the age of our own Earth.

Everyone eagerly awaits the launch of Astro-H in 2016, because the improved X-ray spectral resolution of its calorimeter will allow us to look at the chemical composition of clusters of galaxies with a precision that has never been matched before by any other X-ray satellite, so that we can learn much more about how all the chemical elements were produced and distributed in the Universe.