Boron (B) is the fifth element in the periodic table of the elements. Boron is light but tough with a high melting point, and in space explorations, researches are being conducted to use it as a kind of heat-resistant material on the rockets. Since boron is easy to mine, it has been used by people for a long time. The borides, such as the boron oxide (B2O3) used as the base material of glassware and the boron nitride or boron carbide used as abrasives, are all important materials widely used in industries. Currently, there are as many as 6 kinds of allotropes (simple substances formed by the same element but with different properties since the atoms are bonded together in a different manner) of boron known. In all elements, it is the second most next to sulfur (S), and there may be new allotropes under ultimate environments such as high temperature and high pressure in future researches.

In the periodic table, the elements are mainly classified as metals and nonmetals (semiconductors and insulators). According to the Dictionary of Physics and Chemistry, a metal is a substance that usually has a shiny appearance, is a good conductor of electricity and heat, and is usually capable of being shaped when in solid state. In the microscopic viewpoint, we can describe a metal as a substance with its valence electrons inside moving around freely. The properties of substances are determined by the behavior of their valence electrons. Sometimes when the electrons possess interaction with each other, we will find magnetism in the substance. How valence electrons move around inside is an important criterion to presume the properties of substances, so almost all periodic tables are color coded to make it easy to know whether the elements are metals or nonmetals. Such classification is as well important for liquids so that we can study the liquid state of most of the stable elements.

Figure 1. Periodic table of the elements.

Boron and silicon (Si) are located at the dividing line between metals and nonmetals. It is known that for such elements, the liquid properties are quite different from the solid properties. The elements such as silicon, carbon and germanium, which are typically semiconductors in the solid form, will become metals when melted. Similarly, the semiconductor boron is considered to be a metal when melted. However, the melting point of boron is as high as 2077°C, and furthermore, the reactivity of the melted boron (boron melt) is so high that is would interfere during experiments. As a result, it had been an important issue in material science that whether the boron could become a metal on melting.

To deal with liquids on the ground, we need a container to hold the liquids. However, while holding liquids with a container, impurities contamination from the container wall or the reactions between the liquid and the container will cause problems. The container-less processing (levitation), which has been put into practice recently, is drawing a great deal of attention as an epochal method without causing problems of containers.

The Electrostatic Levitation Technique developed by us uses Coulomb's force to levitate the samples. As shown in figure 2 (a), when we apply an electric field to a charged sample and balance the force and the gravity, the sample will be able to levitate at any place between the two electrodes. The levitating sample will melt down when heated with laser. The size of the sample is about 2mm while the distance between the standard electrodes is about 10mm. A voltage of 10~20kV is applied between the electrodes and to prevent from discharging, a vacuum is kept inside the chamber. Two CCD position detectors are used to detect the three dimensional position of the sample. With the position information measured, we adjust the voltage between the electrodes with PID Controller (Proportional-Integral-Derivative Controller, a feedback controller) so that we can stabilize the position of the sample with an accuracy within ±10μm. We measure the temperature of the sample with a radiation thermometer. No matter whether the sample is a metal or an insulator, it can be levitated as long as it is charged. If we raise the output of laser, we will even be able to melt down the tungsten (W, melt point: 3422°C). As to the boron, we can melt it while keeping it in the air like figure 2 (b). 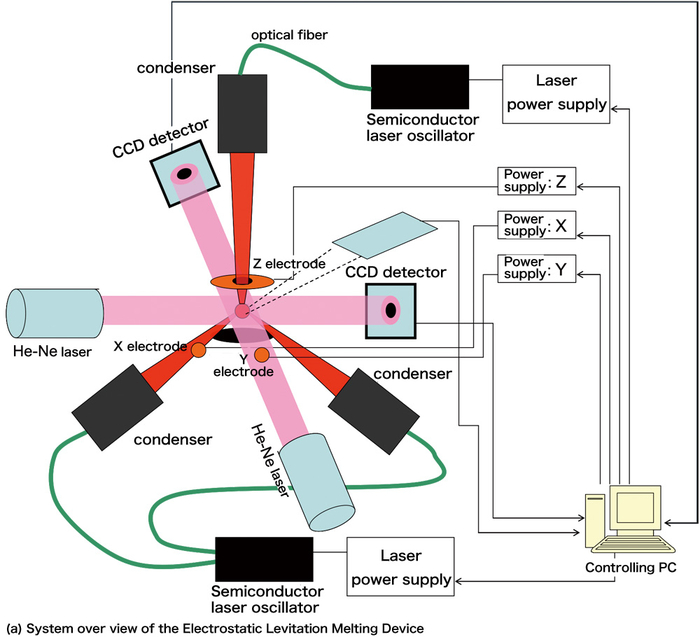 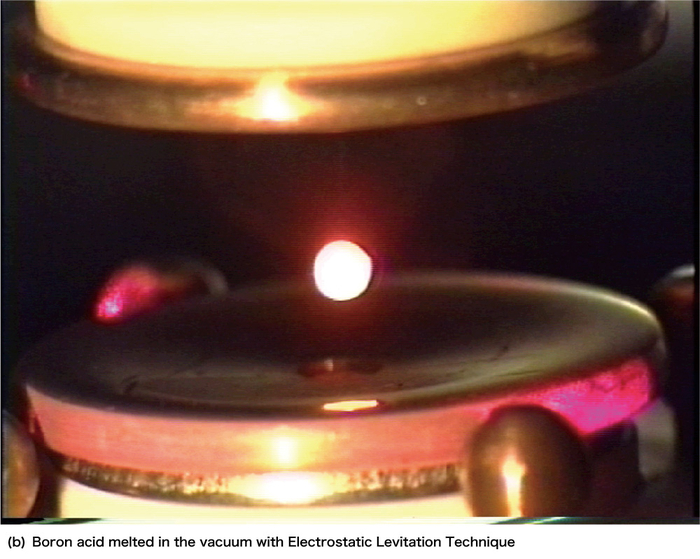 Although we have been able to keep the boron melt with the use of Electrostatic Levitation Technique, there comes the next problem of how to investigate whether the melted boron is a metal. In general, to investigate whether a substance is a metal or not, we research how it conducts the electricity (conductimetry). To do that, we have to attach more than two electrodes to the substance and see the relationship between the current and voltage between the two electrodes. It is easy for us to attach the electrodes to solid substances and measure. Even for the liquids, we are as well able to measure with electrodes inserted in the liquid, if the melting point and the reactivity are both not high. However, since we have not found any substance that does not react with the boron melt, there is no electrode to insert in it and we are not able to measure the conductance of boron melt.

Therefore, we decided to research the actions of the electrons in boron melt with X-ray. The X-ray, a form of electromagnetic radiation, will strongly interact with electrons. When an X-ray is irradiated to the substance, we can find the actions of the electrons in the substance by researching the details of the scattered X-ray. Since we have to use a very powerful x-ray during real measurements, we decided to use an experiment method called Compton scattering measurement with the large synchrotron radiation facility SPring-8. Figure 3 shows the experiment. We sent the whole Electrostatic Levitation Melting Device from the Tsukuba Space Center to the SPring-8 located in Sayou-chou, Hyogo Prefecture, assembled the device in the beamline and conducted the experiment. 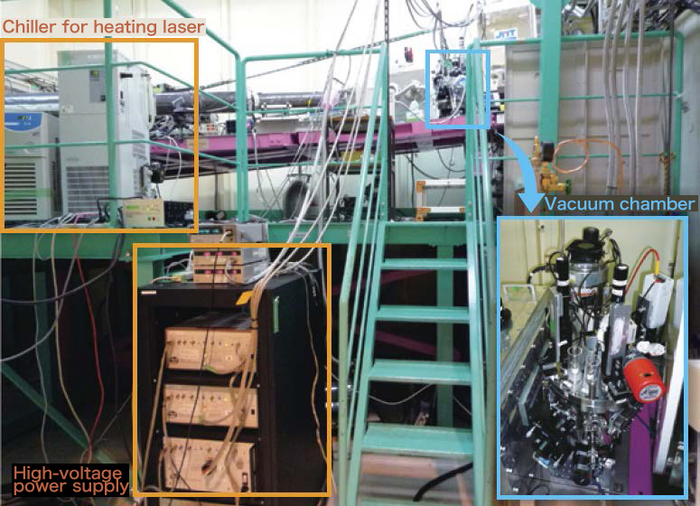 Figure 4. Moving range (itinerant range) of the valence electrons according to the analysis of the experimental results.

The boron is as well a semiconductor and the valence electrons are imprisoned by the protons, but the crystal structure is much more complicated so there are long covalent bonds in it. Because of this, compared to silicon, the valence electrons of boron have a larger itinerant range. While melted, the distribution of the range showed a shift to the right, but most part of the liquid overlaps with the solid. The boron, being obviously different from silicon, has a similar itinerant range between the liquid and the solid. This indicated that boron is keeping the property of a semiconductor like the solid while melted, without becoming a metal. So far, the boron had been considered to be a metal when melted but in fact, it turned out to be a semiconductor.

Heading Towards the Space Experiments

On the ground, since we need a high electric field to levitate the sample against gravity, it is necessary to prevent discharging with a high vacuum atmosphere. However, we cannot avoid evaporation and dissociation while heating liquid in a vacuum. Samples that are easy to evaporate or dissociate, such as oxides, which will lose oxygen while heated in a vacuum, will not melt completely. Because of this, there are many substances, such as oxides with a high melting point, the properties of which have not been revealed while in molten state. Meanwhile, in a microgravity environment, since the sample is levitating in the first place, we can control the position of it with a low voltage of several hundred volts. In this case, it will not discharge even in the gas atmosphere. Being able to use gas atmosphere brings great advantages since it is possible for us to melt the materials which cannot be melted down in a vacuum atmosphere.

The Electrostatic Levitation Melting Device is going to be launched to the international space station with the H-II Transfer Vehicle "Kounotori" 5 in the august of this year. We have planned some experiments using the gas atmosphere on ISS to investigate the properties of the materials which are difficult to be melted down in the vacuum atmosphere on the ground. We are going to try our best to make full use of this precious opportunity to obtain new findings in materials.