On December 3, 2014, H-IIA Rocket F26, launched from the Tanegashima Space Center, put the asteroid probe "Hayabusa2", together with three small sub-payloads, to the deep space exploring orbits. One of the small sub-payloads is the Ultra-small Deep Space Probe "PROCYON", developed by a team led by the University of Tokyo. ISAS developed the communication systems in the joint research with the University of Tokyo.

The nominal mission of PROCYON is the demonstration of 50kg class ultra-small deep space probe bus technology. As advanced missions, some demonstrations about the deep space exploration technologies are going to be done such as X-band Solid State Power Amplifier (XSSPA) using the gallium nitride (GaN) process, a communication experiment for determining the orbit using the VLBI (very long baseline radio interferometry) with a higher precision, and the long time operation of the ion thruster to swin-by the Earth. In about a year after the launch, the orbit will be changed with the Earth swing-by and it is planed that it would go forward to a different asteroid from "Hayabusa2" finally and would perform the super close flyby observation. In addition, it will also conduct a science observation on the Geocorona (a layer of hydrogen spreads around the Earth.)

Since we had taken our stance that we would develop things which were nowhere to find or buy in the world all by ourselves, firstly we investigated whether there were components (communication components) which was possible to install on PROCYON. Deep space probes, however, are typically launched with high costs and years of preparation by the State Institution, and therefore to make them irrefrangible, they are made of reliable and expensive parts for space. For the ultra-small satellite with a budget of only several hundreds of million yen, we, unfortunately, couldn't find the commensurate parts according to the weight, size, power consumption, development time, and costs.

Although we ISAS had to develop communication systems by ourselves, the extremely limited time has made our development even more difficult. It was adopted as one of shared small sub-payloads in September 2013, while the comprehensive test began in the following year, July 2014, and the satellite was carried to the Tsukuba Space Center on November 6, and then launched after 4 weeks. It was only about a year from the adoption to the launch, and we fired ourselves up and focused on the development. As a result of the bold challenge by young people of ISAS and everybody of the small and medium-sized enterprises, Deep Space Communication System was born which is unique and smart (small, lightweight, high-efficiency.)

Realization of the small size, light weight, and high efficiency

Figure1 shows an overview of the communication system of PROCYON. 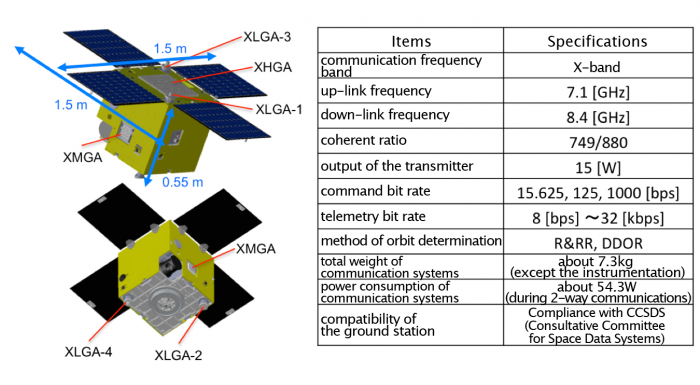 All of the functions which are necessary for Deep Space Communication have been included in the aircraft with a weight of about 65kg and a size of 150*55cm even when the solar panels are expanded. The output of the transmitter in such a compact spacecraft, however, is 15W, and it's designed to hold a telemetry(※ 1) bit rate for more than 4kbps using high gain antenna (HGA) and the 64m parabolic antenna at Usuda Deep Space Center (UDSC), when it arrives the asteroid. Some of you might be surprised at this bit rate. Compared with the wired modem for Analog telephone line (54mbps), it's the reality that the transmission speed is slow, while it is fast for the deep space communication.) 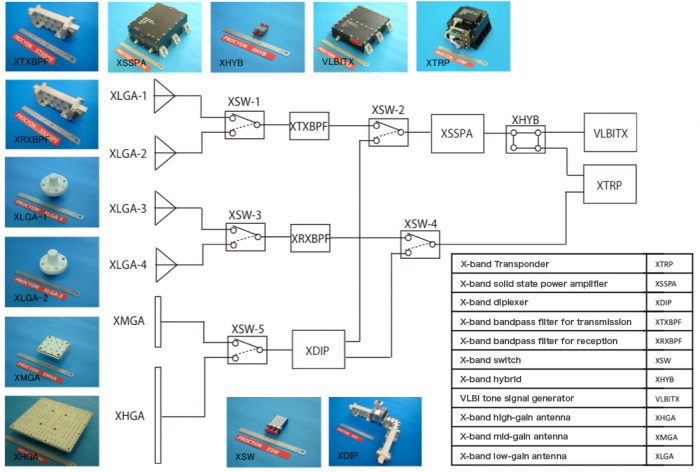 Figure2. The configuration of the communication equipment on PROCYON and the group of the components which were newlydeveloped

For example, the antenna of PROCYON has been designed with a light weight of 1.85kg and a low height. There are some restrictions on the size and the weight about small sub-payloads so as not to affect the launch of the main satellite. We had to design the antenna as small as possible and as low as possible so to make full use of the limited size of the satellite body. In addition, the heat input from the sun to the satellite would increase if HGA is put directly on the top with the solar cell. Therefore, germanium coating Kapton film was placed on the upper surface of the antenna so that it keeps transmission characteristics of radio waves and changes thermo-optical properties as well, and space has been provided between the antenna and the satellite for insulation. Taku Nonomura of the department of spacecraft engineering has optimized this thermal design.

It is a transponder (XTRP) called "repeater", that receives the radio waves coming from the earth station, passes the command (※ 2) to the onboard computer, and on the other hand plays a role to receive the telemetry from the satellite from OBC and send it to the earth station. It is called "repeater" because it receives a signal transmitted from the earth and send it back to the earth again for identifying positions of satellites in space. Small as it is, the reason why it could realize the multi-functionality at a low power consumption is the use of commercial FPGA (※ 3), but there are some effects of radiation in the space environment, and that always makes us worry about the malfunction. For more information, please refer to the "Forefront of space science" which was posted on "ISAS News" in May 2012 issue (No.374) and written by Daisuke Kobayashi at the Department of Spacecraft Engineering.

※ 2 command：command information for controlling the spacecraft, which is transmitted to a spacecraft from Earth

※ 3 FPGA：FPGA, short for Field Programmable Gate Array. Logic and integrated circuit which designers can rewrite even after production.

In order to investigate the effect which heavy particles, a kind of cosmic radiation, give to FPGA, we actually conducted irradiation experiments to know what phenomenon would happen in operation of the repeater bringing breadboard model (BBM) of XTRP produced experimentally by Takasaki Applied Research Institute for Quantum of the Japan Atomic Energy Agency. The people who were responsible for the experiments were above-mentioned Daisuke Kobayashi and Taichi Ito of the group of electronic parts, devices and power supply.

The FPGA of XTRP contains the circuit for detecting rewriting of the logic circuit and overcurrent protection, and we also avoided the malfunction in operation and had enough attention to cosmic radiation by resetting the FPGA with the timer from OBC. In order to estimate the lifetime of the power supply unit of XTRP and XSSPA, we also conducted the proton test of photocoupler in Wakasa Bay Energy Research Center.

Since the signal output from the repeater is weak, it needs to be amplified so as to make it reach the Earth. The Power consumption of the communication system of PROCYON is about 54.3W, 70% of it is consumed by the XSSPA. Therefore, combining the semiconductor element using the latest GaN process with an original circuit configuration, new development was made to achieve high power efficiency. The person, who researched and developed this forefront XSSPA, was Yuta Kobayashi of the group of communications and data processing.

The terrestrial system and initial operation of PROCYON

PROCYON was separated from the rocket 6 hours after the launch. The telemetry started to be received at the 20m station of Uchinoura Space Center (USC), then, it was taken over by the 64m station UDSC and the command operation has started.

PROCYON satellite operation systems are arranged in front of operators (student, etc.) as shown in FIG. 3. Two vertical wide displays are placed with Windows PC, and Generic Spacecraft Test and Operations Software (GSTOS) is virtualized by using a software called VMware. Since we were using GSTOS from the stage of ground test as Mr. Yamada Takahiro advised us, in the initial acquisition and tracking at the time of launch, we brought a demodulator of GSE (satellite ground test equipment) and GSTOS to 20m stations of USC. This made us enable to carry out the monitoring of critical satellite state at the time of launch in real time. In addition, during the rest period of the 34m station of USC from January 2015, using the 64m station of UDSC, simultaneous telemetry reception of PROCYON and "Hayabusa 2" was also implemented by this system. It has been possible for us to use flexible and low-cost satellite operation system, and that's just because everyone of science satellite operation and data center made great efforts to develop GSTOS and they gave us a great deal of cooperation and support about the system construction.

About 10-20 people including teachers and students gathered in the operation room of PROCYON, which were full of youth and enthusiasm, and "2,1, zero" echoed from the directive phone (OIS), shouted by the students who became commanders. 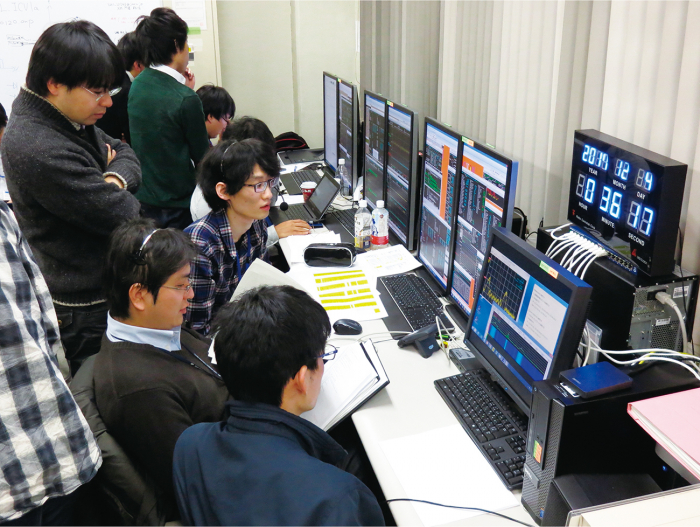 Finally, deep space exploration has now entered a new era when the satellite is designed and developed by university-led team and operated by faculty and students. As a result of leveraging consumer parts and generously investing feasible technology with severe restrictions on the weight, power consumption and time, deep space communication system with ultra-small satellite, which was developed this time, was able to work perfectly in the space as expected. This finding will be also utilized for future science satellite. Such a development, however, cannot be archived by any single individual. It takes the time and effort from so many people from adoption to operation even it is a small mission. What made it possible was the cooperation among medium-sized enterprises, ISAS and the young of Tokyo University, as well as the cooperation between various departments in the JAXA and the leading space company. It is the result of their efforts that they associate in a common purpose beyond the framework of the organization, and I would thank all of them from my heart. Allow me to use this opportunity to offer my thanks once again.