In the present experiment, by using the sounding rocket's sub-orbital ballistic flight, similar environment to that on liquid-fueled rockets during the coasting flight on orbit was realized. In the low-gravity state, the cryogenic test fluid, liquid nitrogen, was introduced into the test sections of similar shapes to the flow channels in the cryogenic propulsion systems. The boiling of liquid nitrogen inside the test-sections and the transition of flow regimes from gas/liquid two-phase flow to liquid mono-phase flow were visualized. The temperatures, pressures and void fractions of each channel were measured as well. The mechanisms enhancing heat transfer were discussed based on the visualization. In the present case, compared with the corresponding ground test, it was confirmed that the two-phase flow in the complex channel could wet the heat transfer surfaces more easily due to the absence of gravity, and that more uniform chill-down effect could been obtained.

Japan Aerospace Exploration Agency, JAXA, is now planning a step-by-step development of launch vehicles considering the future applications of space transportation systems and satellite customer needs[1]. At the first stage of the development, the upper stage of the H-IIA launch vehicle, Japanese primary launcher, is being upgraded for the improvement of payload capacity. Currently, regarding GTO (Geo Transfer Orbit) missions, the upper stage engine of H-IIA burn twice and insert satellites in 28.5 degree inclination GTO. The H-IIA upgrade will aim to decrease inclination for satellites with third burn of upper stage at apogee after long-duration coast.

In order to realize these missions, it is desired for the upper stage propulsion system to obtain advanced technologies, such as, the throttling of engine, low liquid level ignition, improvement of LOX chill-down procedure and propellant settling by using vented propellant[2]. These technologies are expected to be developed in a short term with lower cost and will succeed to the next generation propulsion technologies.

In the present study, the topics are focused on the improvement of LOX chill-down procedure. In order to adapt to the long-duration coast without major system design change, reduction of propellant usage will play a crucial role to achieve the target launch capabilities. The method called "trickle chill-down system", shown in Fig.2, is now under development. The feasibility of this system had been demonstrated in the ground tests. The result showed very small amount of LOX flow, as small as several gram per second, could cool the bearings of the LOX turbopump rather than our conventional long-coast chill-down procedure, impulse chill-down method.

From the viewpoint of the cryogenic fluid management in space, there still remained the concern that the characteristics of heat transfer of boiling flow under low-gravity conditions during coasting flight should be different from those on the ground. Especially with small flow rate, that is, in the case of low Bond number and Weber number, liquid motion is very difficult to be predicted from the ground testing. 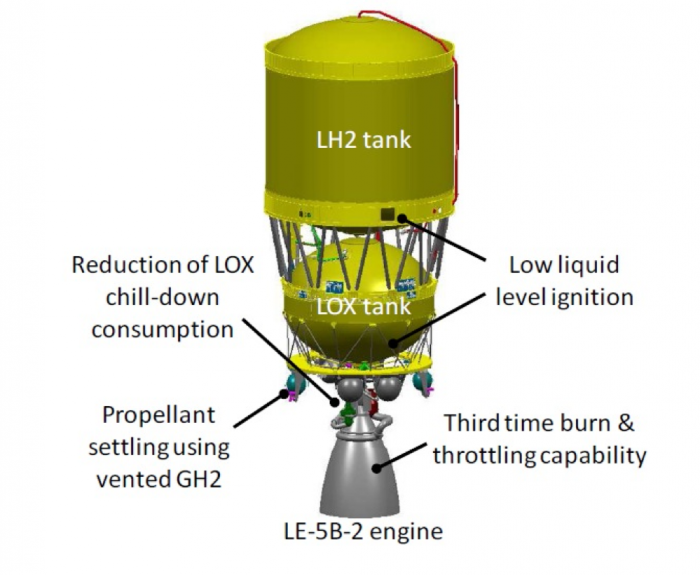 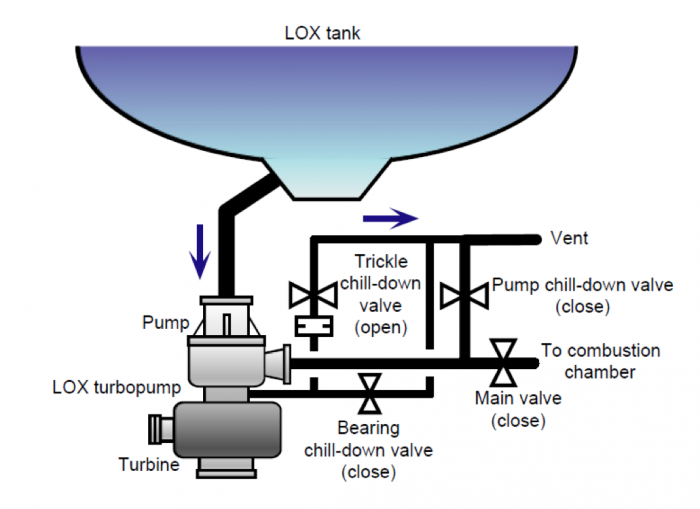 To establish the technology for the appropriate assessment of the thermal-fluid behavior in the upper stage propulsion systems, it is essential to accumulate technical knowledge and experiences about them. So, in order to grasp the fundamental knowledge on boiling flow in a

complex channel, microgravity experiment had been planned and was conducted in 2014. In the experiment, by using the sounding rocket's sub-orbital ballistic flight, low-gravity environment similar to that on upper stage propulsion system during the coasting flight was successfully obtained for about two-hundred seconds. Under the low-gravity state, the cryogenic test fluid, liquid nitrogen, was introduced into the test sections of similar shapes to the flow channels in the cryogenic propulsion systems. The boiling of liquid nitrogen inside the test-sections and the transition of flow regimes from gas/liquid two-phase flow to liquid mono-phase flow were visualized through the transparent wall of the test-sections. The temperatures, pressures and void fractions of each channel were measured as well.

The JAXA launched the S-310-43 sounding rocket from the Uchinoura Space Center (USC) on Aug. 04, 2014, with the objective of "measuring two-phase flow behavior and heat transfer characteristics during coasting flight". The experiment was conducted successful. The S-310-43 dropped into the south eastern ocean off USC after its normal flight and operation of onboard equipment.

Figure 3 shows the test-section module and the schematic drawing of the cannel. Similar to the geometry around the bearings of LOX turbopump, The splitter withd slit, branched tube and dead-end wall corresponded to the pump-side bearing, the vent line for chill-down and the turbine-side bearing, respectively. The splitter separated the cannel into the inlet-side and outlet-side rooms.

Figure 3 Test-section module (up) and schematic of channel geometry (bottom) [3].

The right-side figures in Fig.4 shows the snap shots of liquid surface in the downstream region of the splitter. The corresponding results obtained in the ground test were also shown in the left-side figures, where the gravity force was acted in the direction from the outlet-side to inlet-side. Figure 5 shows the time variation of temperatures measured at Points A and B indicated in Fig.3. During the ballistic flight of the sounding rocket, the liquid nitrogen began to be supplied by the reservoir tank pressurized with gaseous helium. As shown Fig.4(a) observed at timing (a), since the temperature of the solid parts at first was higher than the boiling point of liquid nitrogen, whole of the flow rate was evaporated in the upstream tube and only the gaseous nitrogen was lead into the test-section. Then, the upstream tube being quenched, liquid nitrogen came into the test-section. In Fig.4(b), it was found that the inlet-side room was occupied by two-phase boiling flow and some part of liquid nitrogen was injected into the outlet-side room through the narrow slits of the splitter. It was also visualized that injected liquid could reach at the dead-end wall in the flight case (right) but could NOT in the ground case (left) due to the presence of gravity. At the timing (c) shown in Fig.4(c), the solid wall of the inlet-room and splitter had been almost quenched. In the flight case (right), all of the side-walls in the outlet room was found to be wetted by the injected liquid. On the contrary, in the ground case (left), due to the gravity, it was seen that the liquid and the gaseous phase were clearly separated by the liquid surface settled at the level of outlet port and that the dead-end wall was dried out. The difference in liquid motion affected on the heat transfer. As shown in Fig.5, since the heat transfer surfaces located at high gravitational potential energy were dried out in the ground test, temperature at Point B was hard to be decreased. On the other hand, uniform chill-down effect could be obtained.

Further analysis will be performed by utilizing acquired data to improve the accuracy of thermal fluid analysis models for cryogenic propulsion systems. 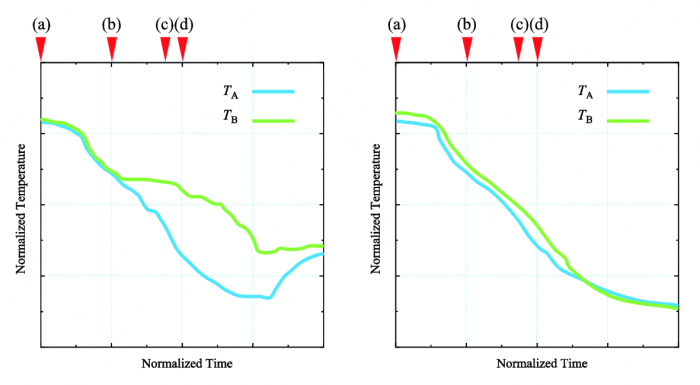 Figure 5 Time variation of temperature at point A and B, ground test (left) and flight test (right)[3].

In the present case, compared with the corresponding ground test, it was confirmed that the two-phase flow in the complex channel could wet the heat transfer surfaces more easily due to the absence of gravity, and that more uniform

chill-down effect could been obtained. It is well-known that the absence of gravity sometimes declines the convective heat transfer of boiling flows especially in simple geometry. But, in the fluid system with complex geometry, the behavior of two-phase flow under the condition of low Weber number and Bond number should not be considered as homogeneous mixture flow, but as unsteady free-surface flow.