After the Earth swing-by on December 3 (Thu.), 2015, Hayabusa2 turned the telephoto lens of its ONC-T camera back on our own planet. What it captured was a stunning visual of the Antarctica region.

The ONC-T camera (Optical Navigation Camera - Telescopic) can take multi-colour images with seven filters. An image based on three of the filters is shown in Figure 1, which shows the Australia and Antarctica continents. Since the Antarctic region is difficult to observe with meteorological satellites, such as Himawari, this is a rare picture of the Earth.

Coincidently, the 57th Japanese Antarctic Research Expedition (JARE57) is currently onboard the icebreaker vessel, Shirase, on her way to the Showa Station in Antarctica. The image clearly shows that a series of vorteses of low-pressure systems in the Roaring Forties and Furious Fifties winds are waiting for the expedition members. 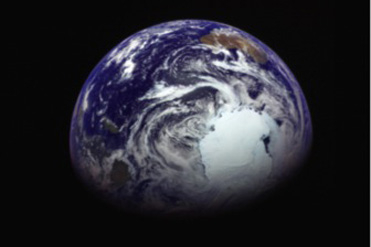 Figure 1. The Earth taken by ONC-T onboard HAYABUSA2 at 13:09 Dec. 4th, 2015 JST. The distance between the Earth and HAYABUSA2 is about 340 thousand kilometres. The Australia and Antarctica continents are seen on the upper right and lower right parts of the Earth image, respectively.(©JAXA)

Hayabusa2 is travelling to Asteroid Ryugu to analyse and bring back hydrated minerals and organic matter. With its seven filters, the ONC-T camera can image the asteroid to find the location of these compounds, as well as determining the best place for the spacecraft to touch down.

An example of its effectiveness is shown in Figure 2. On the left-hand image, the ONC-T filters were used to show locations where plants exist. This is superimposed over the image in Figure 1 on the right-hand side. While New Zealand and the African Continent were previously concealed by cloud, they stand out sharply in their plant life. Meanwhile, Antarctica is completely dark in the green overlay image, depicting a foliage-free region.

In the right-hand panel of Figure 3, the ONC-T filters have picked out the Antarctica ice in blue and the clouds in white. With a normal camera, these would be hard to differentiate as both would appear in similar hues. Now the natural features of the coastline and mountain range that traverses the continent can be clearly recognized in the blue ice image.

The ONC-T camera therefore allows us to get information not only on appearance, but also the material properties. Prior to launch, the ONC-T functionality was checked extensively and these images beautifully confirm that the camera is working as planned. The next stop will be the surface of Asteroid Ryugu, where ONC-T will be deciding the best locations to collect the precious cargo of organic matter and hydrated minerals. Hayabusa2 will arrive at Ryugu in 2018. 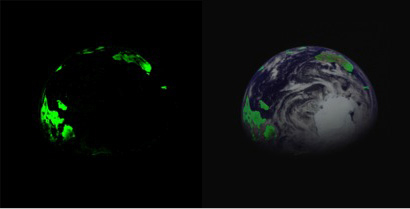 Figure 2. The regions where the ONC-T camera estimates plants exist. The right image is overlaid with Figure 1. New Zealand is seen on the right side of the planet, and the African Continent and Madagascar are seen on the left. Indonesia is at the top and the upper-left may show the peninsula of India.(©JAXA)

Figure 3. Antarctica shown in two colours, white and blue. White indicates clouds while the blue picks out the ice. The mountain range that traverses this frozen continent can be seen in the ice.(©JAXA)

Related link : News by Kameda Lab. in the faculty of science, Rikkyo University