It is one of the great tasks for astronomy to reveal star-formation activity in galaxies. For this purpose, hydrogen recombination lines have been used as one of the essential tools. However, our AKARI observations discovered an anomaly in the hydrogen spectral lines from Ultra Luminous Infrared Galaxies (ULIRGs); our observations showed that the ratio of two infrared recombination lines, Brβ and Brα, significantly exceeded the theoretically predicted value.

For this to happen, interstellar clouds in ULIRGs must have much higher (by more than a thousand times) densities than those in our Milky Way Galaxy. ULIRGs have been known to harbor bursts of star-formation, but the origins of the bursts have not been revealed clearly. Our AKARI observations suggest that the high-density clouds may cause the bursts of star-formation in ULIRGs.

The observational results were surprising. According to the previous theoretical prediction (called case B*6), used widely in many studies, the two recombination lines' flux (Brβ / Brα) ratio has been predicted to be 0.565 or lower. However, some of the ULIRGs we observed had a ratio of about 1, much higher than the case B theoretical prediction.

We therefore suspect that one of the most basic assumptions to derive these widely used case B theoretical predictions cannot be applied to ULIRGs. It has been assumed that we would observe Brα-line and Brβ-line photons emitted by hydrogen atoms without being subject to absorption by other hydrogen atoms. However, our observed results indicate that many of the Brα-line photons radiated from hydrogen atoms near the center of the galaxies are absorbed by other hydrogen atoms near the surface of the galaxies and cannot reach us. We investigate this idea by model calculation, and find that the interstellar gas clouds in ULIRG with much higher (by more than 1000 times) densities than those in our Milky Way Galaxy can explain the observed results.

This paper is based on the Ph.D. dissertation by the first author Yano and is updated mainly by the second author Baba. We plan to make follow-up observations of this result using James Webb Space Telescope, launched last year. 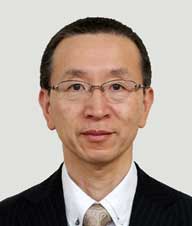 NAKAGAWA Takao
Ph.D. from the graduate school of science, the University of Tokyo.
JSPS (Japan Society for Promotion of Science) Research Fellow.
Professor at the Institute of Space and Astronautical Science, JAXA, since 2003.