When and how did Japanese jade rabbit begin to pound rice cake?

Culture geology is a discipline that considers the interaction between people and geology. For example, in the world, divergent food cultures can be seen. While this represents how people live, food culture is also affected by the geology in each location because the types of plants that can grow well depend on the properties of the ground and soil. In order to understand human culture, geology also often plays an important role.

As well as the geology on the Earth, human culture has been affected by extraterrestrial geology. The most important case is the geology of the Moon. Traditionally, in Japan, the color pattern of the lunar surface, which is caused by basaltic and anorthositic rocks, is considered to resemble the shape of “rabbit”, and it is believed that the jade rabbit (lunar rabbit) pounds “rice cake” on the Moon. The culture of the jade rabbit can be seen in several countries in Asia. The Japanese jade rabbit is also based on Chinese tradition. However, what the Chinse jade rabbit pounds is not rice cake but the elixir of immorality. For a reason as to why the jade rabbit pounds rice cake in Japan, the similarity between “mochizuki” (full moon) and “mochi-tsuki” (pounding rice cake) is usually suggested. However, this hypothesis does not have a basis of data in sources such as literature. Moreover, the date when the jade rabbit started to pound rice cake is not known, and the cultural background at that time is not certain either.

In this work, mainly based on pictures in Japanese books published in the Edo period, the period when the Japanese jade rabbit started to pound rice cake is constrained. In addition, the social background in which the culture of pounding rice cake by the jade rabbit was generated is also discussed.

Referencing lunar images made between the Asuka period and the Muromachi period, the Japanese jade rabbit uses a vase-shaped pot or sits on the ground (Fig. 1). In these images, the rabbit does not use a mortar. On the other hand, in the Edo period, we can see the jade rabbit using mortar and mallet (Fig. 2). These pictures can easily inspire people to think about ponding rice cakes. We can see the same pictures in Chinese books published in the Ming dynasty such as “Gokyo-taizen” (text book of Confucianism) and “Sansai-zue” (encyclopedia) (Fig. 3). Thus, we can presume that intellectuals in Japan referenced pictures of the jade rabbit shown in Chinese books.

From the beginning of 18th century, the mortar of the jade rabbit changed from straight (Fig. 2 a) to a curved shape (Fig. 2 b). In Japanese tradition, a mortar with a curved shape has an older history. Mortars with straight sides were used from the mid-Edo period. We can see that the Japanese jade rabbit therefore gradually uses a traditional type of mortar from the 18th century. Due to this change of mortar, I concluded that the beginning of the 18th century was the period when Japanese people began to think that the jade rabbit pounds rice cake on the Moon.

As a background of ponding rice cake by the jade rabbit, spreading of books and education can be suggested. Because the Japanese society became stable in the Edo period especially after the Genroku, the general population, as well as intellectuals, began to read books. Thus, many people saw the jade rabbit that uses mortar and mallet in several books. However, these books do not say what the rabbit makes. Intellectuals might know that the rabbit makes elixir of immortality. But for the people who read books between their usual daily work, they may have imagined that the jade rabbit makes rice cake from analogies to their own lives.

In Asian countries including Japan, for more than 1000 years (more than 2000 years in some countries), the colored pattern on the lunar surface has been regarded as a “rabbit” (jade rabbit). From a scientific view point, it is strange that a rabbit exists in the Moon. However, when Hayabusa observed Itokawa (asteroid), even scientists and engineers thought that the shape of Itokawa is like a “sea otter” (ISAS News for Itokawa). Even in scientific or engineering missions, people’s recognition is strongly influenced by feelings developed from their daily lives. The jade rabbit has linked Asian people to the Moon for more than 2000 years when they observed or recognized the Moon. In the future, our knowledge of the Moon will grow further, and people will fly to the Moon. Even though the future missions are based on science and engineering, the jade rabbit will frequently be in our hearts. 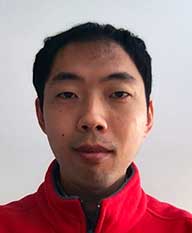 SHOJI Daigo
Researcher at German Aerospace Center(DLR) and Earth-Life Science Institute, Tokyo Institute of Technology from 2015 to 2020. From 2020, researcher at ISAS/JAXA.