Study of optical material for next-generation high-resolution spectroscopic observation: Revealing the cause of infrared absorption in CdZnTe crystals at cryogenic temperature

MAESHIMA Hiroshi
At the time: Dept. of Physics, Graduate School of Science, The University of Tokyo/ISAS

The realization of high-resolution spectroscopic observations in 10-20 µm infrared wavelengths is expected to make a great advance in astronomy by enabling the detection of snow lines*1, which have a big impact on planet formation, and the acquisition of organic chemical information on astronomical objects. However, this observation system has not yet been realized due to many issues such as the compactness required for mounting on a satellite to avoid atmospheric absorption, and the operational capability at cryogenic temperatures (below 10 K*2) to reduce infrared noise from the system itself.

To realize this observation, we are developing an optical element called an “Immersion Grating” (IG, Fig. 1). Because a large optical path difference can be obtained by the light propagation through high-refractive-index material, an IG can be more compact than conventional gratings. Due to this compactness, an IG is suitable for optical systems on satellites. An IG requires a material that absorbs very little light (a low absorption coefficient*3) because light needs to pass through the material. CdZnTe (cadmium zinc telluride) is one of the most promising optical materials for developing IG. The IG is planned to be used at cryogenic temperatures to reduce infrared noise from the system itself, but it has been unclear what causes the absorption in cryogenic CdZnTe.

In this study, we were able to identify the absorption cause in CdZnTe crystals at cryogenic temperatures using a model. The results also allow us to estimate how much the impurity density in CdZnTe must be controlled to realize a practical cryogenic IG. Our study is expected to advance the development of IGs and realize high wavelength resolution spectroscopic observations in the 10-20µm wavelength range. 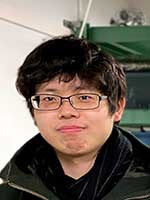