The region of outer space close to our planet (geospace*1) is filled with plasma (electrons and ions). Different types of electromagnetic (EM) waves (oscillations of electric and magnetic fields) occur naturally in geospace. These control the plasma environment that surrounds the Earth, and sometimes cause damage to infrastructure such as spacecraft due to the high-energy particles accelerated by the EM waves. Exactly how these EM waves travel has previously been unknown, but an international collaborative study was able to reveal the first three-dimensional image of the EM wave propagation in space by combining data from the Japanese “Arase and US “Van Allen Probes*2” and two ground observatories. Together, data from these observatories discovered the existence of invisible “propagation paths” for EM waves, and uncovered the mechanism by which EM waves propagate to the ground. By linking these high-performance satellites and ground-based observatories developed in different countries, it was possible to visualize the space environment in 3D, which promises to be a major step toward improving the accuracy of space weather forecast*3 in the future.

It is known that various kinds of EM waves occur naturally in geospace and cause variations in the plasma environment that surrounds the Earth via a physical process known as wave–particle interaction*4. In particular, when geospace storms*5 occur due to solar flares*6, EM waves become more active, and variations of geospace environment sometimes may cause damage to spacecrafts, expose astronauts to radiation, and cause terrestrial power grid failures. As EM waves in space propagate far away from their origin, to correctly understand the effects of EM waves, it is crucial to understand where in space the EM waves are generated and how they are propagated. However, it has been difficult to unravel the origin of EM waves and the mysteries of how EM waves spread spatially using only single-point observations.

“Electromagnetic ion cyclotron (EMIC) waves*7,” which are the focus of this study, are an important class of EM wave in geospace that control variations in the geospace plasma environment. The international collaborative research group, linking observations from space using the Japanese “Arase” and US “Van Allen Probes”, with observations from the Japanese “PWING Project*8” and Canadian “CARISMA Magnetometer Array*9”, has successfully performed simultaneous observations of EMIC waves from different locations (Fig.1).

By comparing the observation data obtained from each locations, it was clarified that only waves that exist in a straw-shaped “propagation path” are able to travel from space to ground. The Van Allen Probes near the geomagnetic equator*10 and the PWING and CARISMA magnetometer on the ground observed the same EMIC waves, indicating the existence of a propagation path for the EMIC waves between space and ground. Arase observed the EMIC waves in the mid-latitudes and contributed to determining the spatial size of the propagation path (Fig.2). Arase achieved high-quality EM wave measurements with the Plasma Wave Experiment (PWE) and Magnetic Field Experiment (MGF) instruments aboard the spacecraft, and the value of the Arase observation was significantly enhanced through the international collaboration.

The precise measurements of plasma particles obtained from “Arase” and the “Van Allen Probes” have also shown that EMIC waves energize thermal ions as they propagate along the “propagation path;” thus, they cause changes to the ambient plasma environment. It is also known that EMIC waves produce proton auroras*11, and the results of this study can be interpreted as clarifying the path taken by the energy that is the source of the proton aurora when propagating from space to the ground.

By understanding where EMIC waves occur in space and how they propagate, it is possible to clarify the mechanism by which the space plasma environment change occurs simultaneously in the vast geospace. The findings of this study will contribute to improve the accuracy of space weather forecast. Further, members of the international collaborative research group are in charge of developing wave instruments aboard the BepiColombo/Mio for Mercury orbiter and the JUICE spacecraft (scheduled for launch in 2022) for Jovian system. Based on these results, we aim to elucidate the mechanism of EM wave generation and propagation on planets other than Earth, as well as move forward toward a comprehensive understanding of space environment and contribute to space weather forecasting. 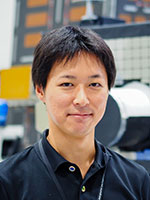