It is almost certain that Mars once supported a large quantity of water. However, it is still unknown how so much water was lost. Previous studies have suggested that dust storms that occur near the surface increase water vapor in the middle atmosphere, and drive the escape of water into space. However, there have been no direct observations to confirm the whole process. In this study, we simultaneously observed a regional dust storm that occurred in January-February 2019 using three different Mars orbiters: NASA's MRO and MAVEN, and ESA's ExoMars TGO. Four instruments onboard the three orbiters successfully captured the impact of the regional dust storm from surface to space, which allows us to quantify the amount of water loss and response time. Since such a regional dust storm occurs almost every Mars year, it is suggested that small dust storms play an important role in water loss on Mars.

One of the striking characteristics at the Martian environment is the presence of “atmospheric dust” which is constantly supplied from the surface. Dust always exists in the Mars atmosphere, and it plays an important role in the Martian meteorology and climatology as a determining factor of the thermal structure via absorbing the solar light. Moreover, “storms” involved with dust are very frequently observed on Mars.

Mars has lost most of its initial water to space as atomic hydrogen and oxygen. Previous studies suggested that dust storms occurred near surface increase the water vapor in the middle atmosphere and drive water loss to the space. However, there is no direct observation to confirm the whole process.

In this study, we successfully performed simultaneous observations of a regional dust storm occurred in January- February 2019 by three different Mars orbiters : NASA’s MRO*1 and MAVEN*2, and ESA’s ExoMars TGO*3, which allows us to monitor dust, temperature, water ice clouds, water vapor, and hydrogen from the surface to the space before and after the regional dust storm. Immediately after the onset of the dust storm, we found that the atmospheric temperature is raised due to heating by dust and water ice clouds is disappeared because of higher temperature. As a result, water vapor can expand to higher altitude and escape hydrogen is increased by a factor of 5-10 compared to the normal condition (Fig. 1). Moreover, we found that increase of escape hydrogen occurred almost one week after the increase of water vapor in the middle atmosphere.

Since such a regional dust storm occurs almost every Mars year, this study suggests that small dust storms play an important role in the water loss on Mars. 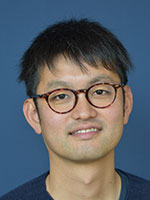