In December 2015, the longwave-infrared (LIR) camera mounted on the Venus Climate Orbiter "Akatsuki" discovered a bow-shaped feature stretching about 10,000 km in a north-south direction. This pattern remained in nearly the same place over the observation period of four days, without being affected by the easterly wind (super-rotation) in the Venus atmosphere. Examination using numerical simulations suggested that turbulence in the lower atmosphere generates waves that propagate through the atmosphere. The waves propagate north and south through the sky, creating a bow-like temperature distribution passing through the upper end of clouds at an altitude of about 65 km. This study showed that the state of Venus' lower atmosphere can be inferred from observations of its cloud tops.

This research result was published on 17 January 2017 in the online edition of the UK scientific journal Nature Geoscience.

Figure 1: Images of Venus taken by Akatsuki in December 2015

Observations by the longwave-infrared (LIR, note 1) camera mounted on the Venus Climate Orbiter "Akatsuki" discovered a bow-like formation stretching about 10,000 km in a north-south direction in December 2015.

It was confirmed that the LIR discovered a bow-shaped formation extending in a north-south direction that remained in place without being swept away by the super-rotation, an easterly wind of about 100 m/s, during the initial observation period. Researchers seeing the returned images were amazed, saying things like "We've never seen anything like this, on any planet," and "What could that possibly be?"

Planetary science and meteorology researchers were highly interested, wondering by what mechanism such a large-scale temperature structure could form.

LIR is a form of thermography with sensitivity near wavelengths of 10 μm. Observation in LIR make it possible to distinguish between cloud-top temperatures on Venus to a temperature difference of 0.3 °C.

Meanwhile, the ultraviolet imager (UVI, note 2) aboard Akatsuki is a camera that captures ultraviolet rays at wavelengths of 283 and 365 nm. Through observations with the UVI, we can investigate the distribution of unknown substances thought to be located at close to the same altitude as the LIR observations.

Comparing Venus' topography with the location of the bow-shaped structure, we determined that the center of the structure was located just over the Venusian continent called Aphrodite Terra, which reaches an altitude of approximately 5 km (Fig. 2).

To investigate the cause of the observed bow-shaped structure, the researchers performed numerical simulations of a simplified Venusian atmosphere and investigated under what conditions such a structure might occur.

Assuming local pressure variations to the lower atmosphere at an altitude of 10 km, simulations revealed a "gravity wave" appeared in the sky. When reaching an altitude of 65 km, this wave was shown to spread throughout the sky into a bow-like shape (Fig. 3). In other words, the lower atmospheric pressure changes in a limited area propagate throughout the atmosphere, ultimately creating the large bow-shaped structure.

On Earth, for example, artificial satellites can observe gravity waves leeward of the Andes mountains. However, the bow-shaped structure found on Venus was much larger. It is expected that such waves affect the atmosphere far above the cloud layer.

The bow-shaped structure observed in December 2015 was no longer observed from January 2016, but unclear observations of a similar structure were made at another place and another time. The research team speculates that specific conditions are necessary for the appearance of these structures.

Clarifying all aspects of the generation mechanism of such bow-shaped structures will require narrowing down the conditions under which they occur. To do so, the team need more data of larger time and area coverages. The observation team has improved observation programming and the observations of bow-shaped structures. By analyzing these data and performing more detailed simulations, we expect to advance our understanding of Venus' lower-atmosphere weather, which is the source of these waves. 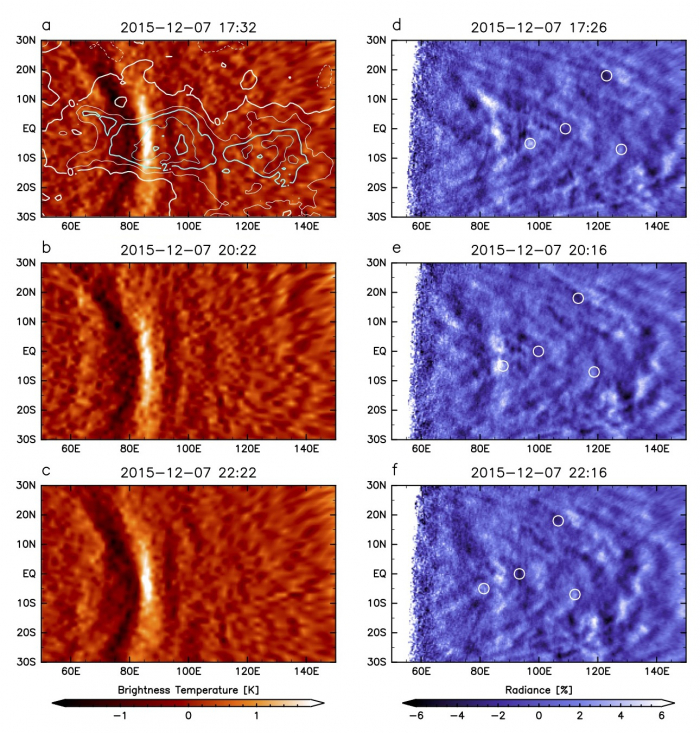 Figure 2: Image processing applied to LIR images from 7 December 2015 emphasizing the bow-shaped pattern and mapping it against the terrain. The distance between terrain contour lines is 1 km. These images show that the observed structure appears above highlands (the western part of the Venusian continent Aphrodite Terra). 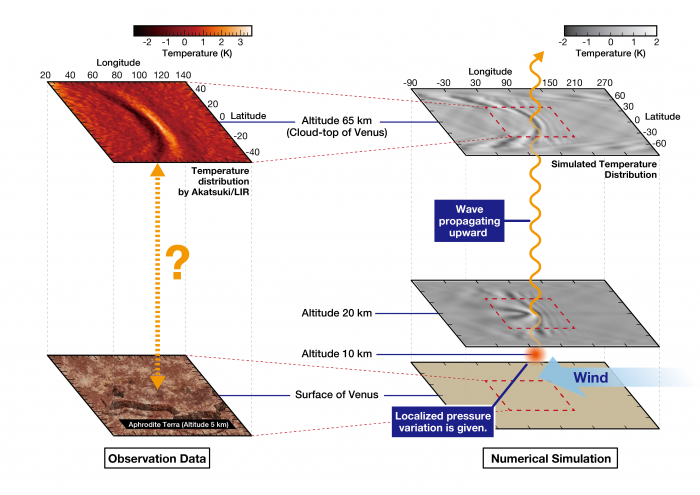 Figure 3: (Left) Below the bow-shaped pattern seen in LIR observation images from 7 December 2015 is a highlands area called Aphrodite Terra.
(Right) The bow-shaped pattern around an altitude of 65 km reproduced by computer simulation. When atmospheric turbulence occurs in the lower layer of the Venusian atmosphere, generated waves propagate through the sky, and spread in a bow-like shape.

Rikkyo University, ISAS/JAXA, and other institutes developed a method of thermography for capturing infrared rays at a wavelength of 10 μm. A detector called an uncooled microbolometer is adopted, realizing the compactness and weight reduction that are indispensable for spacecraft installations. This was the first microbolometer developed based on popular consumer technology, and it became the first such product equipped on a spacecraft. The LIR camera can distinguish temperature differences of 0.3 °C at the observation target, the cloud tops of Venus, which have temperatures of around - 40 °C. First put to practical use in Akatsuki, a similar camera was also mounted in the asteroid explorer "Hayabusa 2," under the name "TIR." Since the LIR camera, many similar devices equipped with uncooled microbolometers have been developed for mounting on next-generation spacecraft. These have been installed in Earth observation satellites and are being increasingly used in the field of space.

Hokkaido University and JAXA have developed cameras that capture ultraviolet rays at wavelengths of 283 and 365 nm. Sulfur dioxide and unknown chemical substances that absorb ultraviolet wavelengths are related to the formation of clouds on Venus. This imager uses ultraviolet rays to capture the distribution of these materials and determine wind-speed distributions from their variations at cloud-top altitudes.